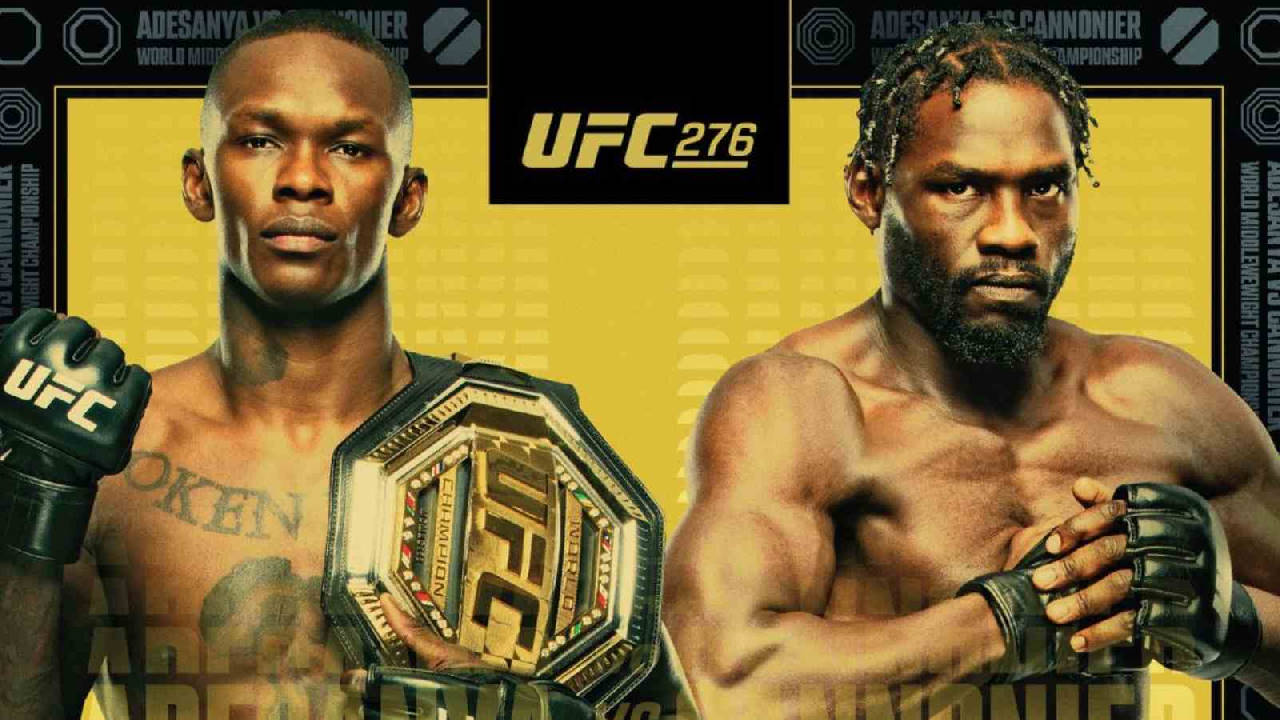 UFC 276 takes place this coming Saturday night in Las Vegas and we’ve got our predictions for all the fights below.

Adesanya already has four successful defences of his middleweight title as he prepares to face another challenger in Cannonier, who has five wins from his last six Octagon outings.

Initially a heavyweight fighter, Cannonier gradually came down in weight until he found his true calling as a powerfully built middleweight with big finishing power, though he’s not all about brute-force as he’s actually a fairly patient striker who has improved his technical ability over time and will look to land thudding leg kicks alongside his heavy-handed punches.

So, Cannonier’s technique is good, but in Adesanya he’s facing a top-of-the-food-chain striker who honed his craft at the highest level in kickboxing before becoming one of MMA’s biggest stars.

A truly dynamic striker with a 5″ height and 2.5″ reach advantage to show it off to it’s full extent, one of Adesanya’s best weapons may well be the fact that he has such a high fight IQ. That enables him to control the distance the fight is fought at and stay defensively sound, while reading his opponents like a book with razor-sharp counters and a knack for selecting the right shot at the right time.

Cannonier may have a power advantage, but I think he’ll find it difficult to find a home for his biggest punches, and it may well be that he’ll have to resort to trying to wrestle the champion in an attempt to gain the upper-hand with his hard-hitting ground-and-pound.

However, I’m not convinced that Cannonier’s wrestling is good enough to successfully make the entries he needs to bring down Adesanya, who will prove to be too slick and too fast, and will be the fresher man in the later rounds as he increasingly starts to pick apart the challenger on the feet and retains his title with a decision victory.

Unbeaten in his 11 UFC fights so far, including two decision victories over Holloway, Volkanovski rightly comes into this trilogy fight brimming with confidence.

It helps that since his very narrow split-decision win over Holloway in their last encounter in 2020 that Volkanovski has convincingly beaten Brian Ortega and then put on an absolutely dominant display of striking during a TKO win against ‘The Korean Zombie’, which appeared to suggest that the champion is still continuing to evolve his skills.

The same can be said of Holloway though as he put on an absolute striking clinic against Calvin Kattar in his next fight and defeated another high-level striker in Yair Rodriguez after that.

So this trilogy fight is shaping up to be another masterclass between two of the very best fighters in the sport where the very narrowest of margins may decide who wins and who loses.

I’ve always felt that Holloway is the more gifted and complete striker of the two with a wealth of dynamic weaponry at his disposal and an expert ability to put it all together with fluid, technical combinations. He will also feel he can land the more damaging blows here, having already knocked down Volkanovski twice in the early rounds of their previous fights, albeit only briefly.

Nevertheless, Volkanovski is also an excellent striker who might not be quite as eye-catching with his offensive offerings, but his more simplified, yet finely-honed stand-up style, including plenty of leg kicks, has proven to be very effective against Holloway, and the fact that he’s been able to match his high tempo has also been a key factor.

Meanwhile, as he looks to make further adjustments to the formula that won him the previous two fights, I do think there’s a real chance that Volkanovski may look to utilize his wrestling from earlier on this time around as there’s multiple benefits to that, from potentially getting some control time through to making Holloway more cautious on the feet and also wearing on his cardio.

This is such a hard fight to call and I’ve been going back-and-forth about my pick over the course of the week. However, in the end I’ll lean towards Volkanovski to take advantage of his wrestling alongside his striking to gain a slight edge on his way to another narrow decision win.

Strickland comes into this fight on a six-fight winning streak and ranked No.4 in the division, but a somewhat cautious, risk-adverse strategy last time out in split-decision victory over Jack Hermansson that was at-odds with his outspoken, brash and often controversial persona didn’t seem to go down well with the UFC brass.

The result is that rather than potentially fighting another leading contender, he is instead going up against the unranked but extremely dangerous Pereira, who only has two wins in the UFC so far, but already carries a big reputation due to the fact that he holds two victories over Israel Adesanya in 2016-2017 during their kickboxing days, with one of those coming by way of knockout.

Adesanya turned his attention fully to MMA not long after that, while Pereira stuck around in kickboxing for a few more years, becoming a double-champion for Glory, while only dabbling in MMA on the side until signing for the UFC, leaving him with a 5-1 record overall so far in this sport.

Needless to say Pereira is operating at a very high level technically in the striking department and has finishing power in all eight limbs, while he’ll also have the advantage of 3″ in height and 4″ in reach over Strickland on Saturday.

However, at 35-years-of-age, Pereira has committed to MMA at a relatively late stage and as such doesn’t have the most well-rounded skill-set, so he has to lean heavily on takedown defense to keep the fight upright.

In an ideal world Strickland also likes to let the fight play out on the feet. He has a bullying style, looking to pressure his opponents with a high-paced striking style and toughness, and though he doesn’t have particularly notable knockout power, he does still hit hard enough to gain respect.

Strickland does also have wrestling ability though and is generally just a more complete and experienced fighter than Pereira in MMA terms.

This close to title contention it seems unlikely that he will want to risk it all by just wading into a big firefight with a deadly striker like Pereira, and so I feel he will opt to outwrestle him sooner rather than later if things aren’t going his way.

If Pereira’s takedown defense holds up to that he’s in trouble, but I’ll take Strickland to find a ground-and-pound or submission finish by the end of the second round.

Originally scheduled for the prelims, this fight gets bumped up to main card status after Miesha Tate vs. Lauren Murphy fell through. It comes at a time when Lawler has got back to winning ways with a TKO stoppage of Nick Diaz after losing four-in-a-row prior to that, while Barberena sealed a new UFC deal recently after back-to-back wins.

Lawler had looked somewhat jaded and even uncharacteristically gun-shy at times prior to the Diaz fight, and whether that was due to having been KO’d by Tyron Woodley, having lost some of the fire to compete after losing his belt in that fight, or simply due to the fact that he was dealing with a series of wrestlers that resulted in a more cautious approach is up for debate.

Even at 40-years-old, an in-form Lawler is still a dangerous man in the Octagon though and he’ll be the more technical striker of the two, while also carrying vicious knockout power. He’ll also not have to worry about having to make much use of his takedown defense here as Barberena will bring the kind of stand-up battle that he prefers.

However, if his heart is not in it then Barberena could punish him as he pushes a high pace, has solid power and is always up for a brawl, though he does have some technical ability to back that up.

At his best Lawler would be an easy pick here, but it’s hard to know how much to read into his solid performance last time out given that Diaz was very rusty after so many years on the sidelines.

I think Barberena’s aggression and fighting spirit will fire Lawler up though and when fists start flying he’ll land the bigger, cleaner shots to emerge victorious, but Barberena’s durability might well take the fight all the way to the scorecards.

With a 7-1 record in the UFC and coming of a trio of big victories via strikes, O’Malley is becoming a big star in the UFC despite only being No.13 in the bantamweight rankings, and he’ll look to push into the top 10 if he can get past Munhoz, who has been going up against some of the division’s biggest stars in his last five fights, but only came away with one victory.

That doesn’t tell the full story though as the 35-year-old took top talents like Aljamain Sterling, Frankie Edgar, Jose Aldo and DOminick Cruz to the scorecard in ‘Fight Of The Night’ performances during that time, which speaks to the fact that he’s much better than his recent record would suggest.

Munhoz is a well-versed striker who will keep up a good volume of strikes offensively and has good success with leg kicks, while he’s also a finishing threat on the mat with his Brazilian Jiu-Jitsu. Another feather in his cap is that he’s never been finished in his 27-fight career, though that’s not from a lack of trying as he does leave himself open to being hit a lot.

That could be a problem here as O’Malley has the kind of striking ability that ends fights with fast, accurate and well-timed punches and kicks. That’ll also be accentuated by the fact hat he has a major 5″ height and 7″ reach advantage.

With that in mind I think that Munhoz finds himself in another less-than-favorable match-up in which the faster O’Malley will be able to punish him with his strikes from range and I can see that taking a toll on him that will lead to a late stoppage via TKO.