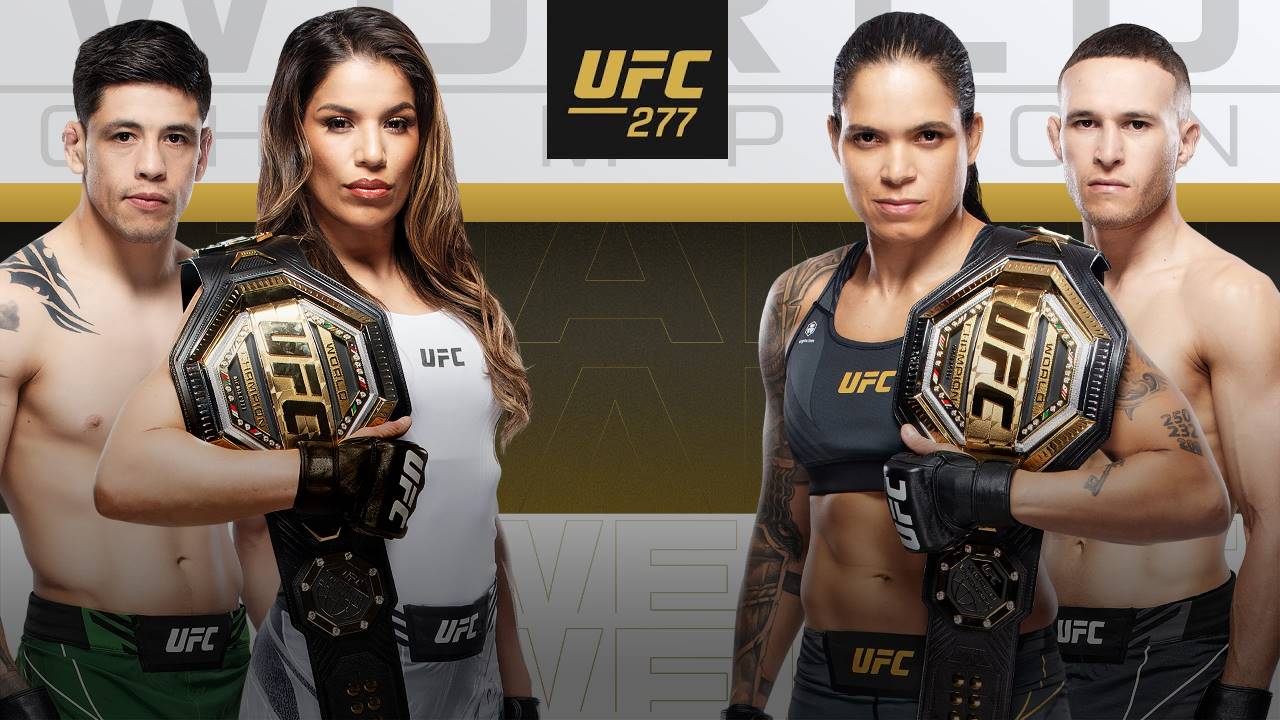 UFC 277 takes place tomorrow night in Dallas, Texas and we’ve got our predictions for all the fights below.

In December of last year Pena sent shockwaves around the world as she did the unthinkable and not only got the better of long-time bantamweight champion Amanda Nunes on the feet, but then proceeded to get her to the mat and lock in a submission finish to win the title and end her opponent’s 12-fight unbeaten run.

It was a truly bizarre spectacle to witness as Pena has never been known for her striking prowess, while Nunes operates at an elite level in that department, yet on the night she appeared to abandon skill and strategy and was drawn into a prolonged slug-fest which soon led to her running out of steam, paving the way for Pena to emerge with one of the all-time great upset victories.

Many theories have been posed since then as to where it all went wrong for Nunes, with some suggesting that her heart is no longer in the fight game after having beaten a whose-who of female MMA for many years, earning a life-changing amount of money in the process. However, Nunes herself has pointed to a disastrous fight camp in which she had Covid and then suffered from a knee injury that left her unable to train properly.

Whatever the reason, the up-side for Nunes is that she would appear to have all the tools she needs to fix what went wrong last time out. That’s because it wasn’t that Pena was doing something particularly skillful that resulted in her gaining the upper-hand, it was more a case of grit, determination and toughness as she planted her feet and threw punches down the pipe.

This time around I’d expect to see Nunes using her natural speed advantage and footwork together with more focus on creating angles and utilizing head movement in order to hit and not be hit in return instead of just constantly heading straight into the fire. Pena remains a threat though as there’s no doubting her toughness, durability, self-confidence and desire to win.

She also has very good cardio and applies an aggressive, pressure-heavy pace that could trouble Nunes own at-times questionable gas tank. In addition, Pena’s best work is often done in the clinch and on the mat, which would be a good option to further wear on Nunes energy reserves.

So much here seems to depend on Nunes mindset and it’s hard to get a read on it for certain. The fact that she’s now moved her camp from ATT after many years to start her own cosy home gym close to her family is another potential red flag here, but even so, it’s still hard to pick against an all-time great who is clearly the more skilled fighter here, and so I think with a smarter, sharper approach to the striking exchanges she can emerge with a second round TKO victory here.

The UFC’s plans for a fourth flyweight title fight between Moreno and Deiveson Figueredo fell through due to the champ being injured and so they’ve now pressed ahead with an interim title bout against Kara-France instead.

These two have met once before, with Moreno emerging victorious via unanimous decision back in 2019. However, Kara-France is now coming off three wins in a row, including first round finishes via strikes against Rogerio Bontorin and Cody Garbrandt to earn his place opposite the former champ.

Moreno is a well-rounded fighter who possesses a strong submission game, but also demonstrated in his trilogy with Figueiredo that he also has the ability to perform well against a highly-skilled, heavy-handed striker, and is extremely durable and has excellent cardio too.

Kara-France is a very good striker who has some of the heaviest hands in the division, so he does hold the power advantage here. That being said, he does have a tendency to load up on his bigger strikes at times and that’s something Moreno will look to exploit with his high pace and faster jab.

The last fight between these two was fought on the feet and with Kara-France having very good takedown defense it’s quite possible it’ll be the same story here, though Moreno would have the advantage if the fight does hit the mat at any time.

Overall I expect another very close fight here, but I think Moreno’s fights with Figueiredo will serve him well here and have also given him valuable five-round experience that Kara-France doesn’t have, and that will help him to edge out the later rounds and emerge with a decision victory.

After a KO loss to Tai Tuivasa last time out, Lewis now returns to fight Pavlovich, who has won his last three fights in the first round via strikes.

Lewis’ style as well known at this stage. As one of the heaviest punchers ever in UFC history, Lewis is not a man who feels a need to let his hands go often. That’s perhaps partly due to his highly questionable cardio, but also because he knows that a single connection can end the fight at any time.

He often operates at a positively sluggish pace, which makes it even more surprising how fast and light on his feet for his size he can be when he does throw heavy leather. Pavlovich is a far more active striker and will hold a significant 5″ reach advantage here as he looks to land punches from range, before swarming in with relentless left and right hands if he gets an opponent hurt.

It’s at times like that where Pavlovich’s chin is left exposed though and with Lewis having the kind of one-punch KO power that comes out of nowhere I can see this being another one of those fights where Lewis is losing right up until the moment he land a single fight-ending blow in the second round.

Perez last fight was for the flyweight title against Deiveson Figueiredo back in 2020, which saw him get caught in a guillotine choke in the opening round and now he returns after a two year absence to take on the 4th ranked Pantoja, who picked up back-to-back victories last year.

Pantoja actually holds two prior wins over co-main event star Brandon Moreno, having first submitted him on The Ultimate Fighter back in 2016 and then beating him by decision in the UFC a couple of years later, so that give some indication of how good he is.

A dangerous fighter wherever the action goes, Pantoja has a strong submission game with a particularly good rear-naked choke, while also being aggressive on the feet with good power in his strikes. On top of that, in 29 career fights Pantoja has yet to be finished inside the distance.

Perez is well-rounded too, with solid boxing on the feet backed up by good wrestling on the mat. He is also a submission threat too, but has been tapped out himself on four occasions.

This should be a competitive fight, but one in which I feel Pantoja will get the better of the striking exchanges and can also hold his own on the mat too.

With Perez having had a long layoff and weight issues in the past it only adds to the feeling that Pantoja will win out here, though his opponent is good enough that it may well end up going to the scorecards.

No.4 ranked light-heavyweight Ankalaev carries an impressive eight-fight winning streak into this fight as he goes up against a former title challenger in Smith, who is coming off three stoppage wins in the past two years.

Ankalaev is a very good all-rounder as he has a very assured, technical kickboxing game that’ll say him stay calm and methodical under pressure, while delivering strikes with good power, while he also has strong wrestling ability too.

Smith is a fighter who is always looking for a finish as evidenced by 34 stoppage victories from 36 career fights, whether it’s on the feet with powerful mauy thai or on the mat where he is a constant threat via submissions.

However, Smith is far to immune from being finished himself over the course of his 36-16 career, with 13 of his losses coming via either strikes or submission.

On the other hand, Ankalaev holds a 17-1 record, with his only loss being a literal last-second submission loss after being caught in Paul Craig’s infamous triangle choke.

I see this being a difficult fight for Smith as Ankalaev stays very cool, calm and collected when he’s under fire and is hard to hit, while he’ll also make it difficult to get anything going on the mat with his stifling wrestling ability, and so in the end I think he comes away with a decision win here.