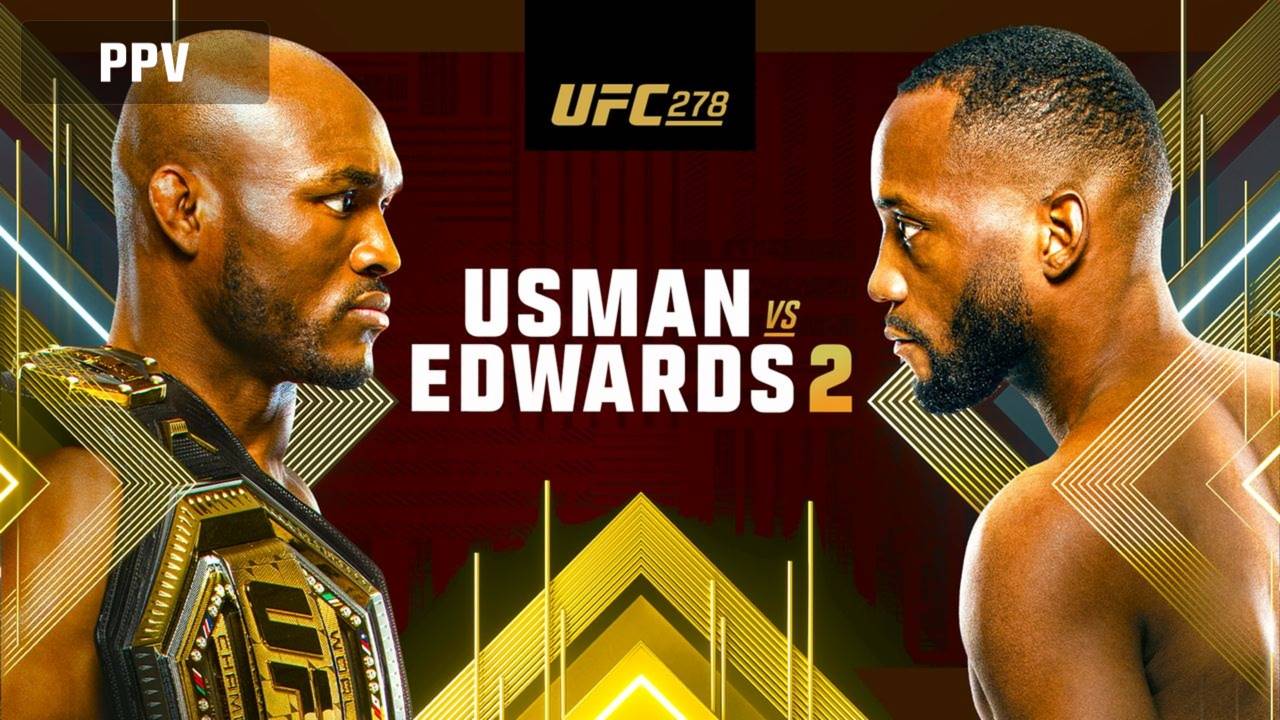 UFC 278 takes place tomorrow night in Salt Lake City and we’ve got our predictions for all the fights below.

Usman remains undefeated in his 15-fight UFC campaign and heads into Saturday night’s event looking for his six successful welterweight title defense in a row against Edwards, who previously lost to him by unanimous decision back in 2015, but has since compiled a 10-fight undefeated run.

In their first fight Usman was able to use his dominant wrestling to beat Edwards, but as it turns out, in the years since it’s actually Edwards who has improved upon his own wrestling game and often used that to secure wins, showing a willingness to embrace the grind to win out on the scorecards, despite being a sound technical striker.

Meanwhile, Usman has gone in the other direction, focusing on strengthening his striking ability, and as such he’s now far more comfortable and more threatening on the feet than he was when they first met.

That presents a real headache for Edwards, as it’s now hard to see where he can gain the upperhand here, with the general consensus being that Usman doesn’t appear to have any notable weak points in his game.

He’ll now be extremely competitive on the feet, still should hold a sizeable wrestling advantage, and on top of that he’s a cardio machine, has a vast amount of fight-round experience at the highest level, and has a champion’s mindset to go along with it.

Perhaps Edwards could still hold a slight technical advantage on the feet, but he’s not a big finisher and has quite a cautious approach that won’t put Usman outside of his comfort zone. And even with that I still think Usman is likely to go to his wrestling often in order to ensure he comfortably retains his title on the scorecards.

Former middleweight champion Rockhold has been conspicuous by his absence for the past three years after being KO’d three times in his past four fights, but now he’s making a comeback and heading straight into the fire with a big fight against former title contender Costa, who has lost his last two bouts.

It’s a bit of a headscratcher why Rockhold would push for a fight against one of the division’s most physically imposing and dangerous striker given how shaky his chin appears to be these days.

Perhaps he is banking on Costa having completely gone after the boil after a decidedly dodgy looking performance in his title TKO loss to Israel Adesanya in 2020, followed by a complete fiasco of a weight-cut failure prior to his fight with Marvin Vettori last time out, which forced it to be contested at 205lbs on extremely short notice.

At that stage alarm bells were ringing as to both Costa’s mental and physical state, but to be fair to him, while he lost by decision, he did look better than you might have expected going into it, still demonstrating solid cardio while being a big threat on the feet. And in the lead-up to his latest match-up he appears to be in much better shape and also seems noticeably more focused mentally, so Rockhold could well be going up against a rejuvenated version of Costa on Saturday night.

Still, there’s no doubt that, chin issues aside, Rockhold is a very talented fighter. He’s a very good athelete, he strikes well from range and will have a 5″ reach advantage here, though it’s his kicks in particular that he makes the best use of on the feet. However, it’s perhaps his strong grappling ability that is his best weapon, even if he hasn’t utilized it as much as he should, demonstrating strong control and submission ability on the mat.

Rockhold is now 37 though, so he’s past his prime and his bad habit of leaving his chin exposed at times will be hard to correct at this late stage in his career.

Perhaps if he doggedly sticks to getting Costa down on the mat then he can deliver an upset here, but it’ll be easier said than done to get Costa down and in the mean time I’m just not convinced his chin can withstand much contact at all from such a heavy-handed striker, so I’ll take Costa to finish him early here by KO.

Aldo is looking for one last title push before calling time on his career, and to do so he’ll need to build on his current three-fight winning streak against the No.6 ranked Dvalishvili, who is on his own journey towards the belt with seven wins in a row to his name.

Naturally, Aldo will be looking to keep this fight standing, making use of his strong takedown defense so that he can make use of his high-level boxing ability, while also landing the occasional punishing leg kick into the bargain.

He’ll certainly hold a major advantage in the stand-up department over Dvalishvili, who is awkward at best on the feet, but he is absolutely relentless with his takedown attempts and with the cardio to continue to keep that up for 15 minutes he’s proven to be a nightmare for many fighters to deal with.

Aldo will do a better job than most of fending them off, but even so, the way Dvalishvili chains his attempts together is going to test even Aldo’s ability to stay upright, and even in defending attempts he’ll have to use up some of his energy reserves, and that’s a concern as cardio has never been the former featherweight champ’s strongest suit.

As such I’ll take Dvalishvili to stifle Aldo’s striking in the early stages and gradually wear him down with takedown attempts, making them easier to land in the later rounds to secure a decision victory.

Tybura is coming off a loss to Alexander Volkov, but had won five fights in a row prior to that, and now goes up against an undefeated heavyweight in Romanov, who has a 16-0 career record, including five wins in the UFC.

Romanov’s record is impressive and he’s proven to be a very strong, dominant wrestler with good submissions and ground-and-pound, but the calibre of opposition he has faced is less so, and as such this is a better test of his ability against a seasoned veteran in Tybura.

Tybura is fairly well-rounded, but he does like to utilize his own wrestling, which would seem to be a dead-end in this particular match-up. As such he’ll have to rely on his kickboxing from range, looking to make the most of his 1″ height and 3″ reach advantage.

Tybura’s not the most potent or speedy striker though and so I think he’ll have a difficult challenge trying to contain Romanov, who should be able to get in close and use clinch work and wrestling to grind out a win here.

After two losses in a row, Pedro got to winning ways with a KO victory last time out, while Hunsucker has yet to taste victory in the UFC, with two first round losses via strikes leaving him with a 7-5 career record.

As such, Hunsucker is now dropping down to 205lbs for this fight as he looks to reverse his fortunes, but even so he’ll still actually be at a 1″ height and 4″ reach disadvantage against Pedro.

Hunsucker isn’t a particularly technical striker, so he’ll be looking to slug it out on the feet with hard punches and low kicks. A troubling stat though is that he’s never made it beyond the first round in his 12-fight career, and that includes five losses via strikes in those opening five minutes.

So, it looks like this is a fight tailor-made for Pedro to get the win. He’s certainly the more technical striker and will operate effectively from range with good kicks, while he also has solid BJJ ability on the mat too. I’ll take him to get a first round TKO finish here.