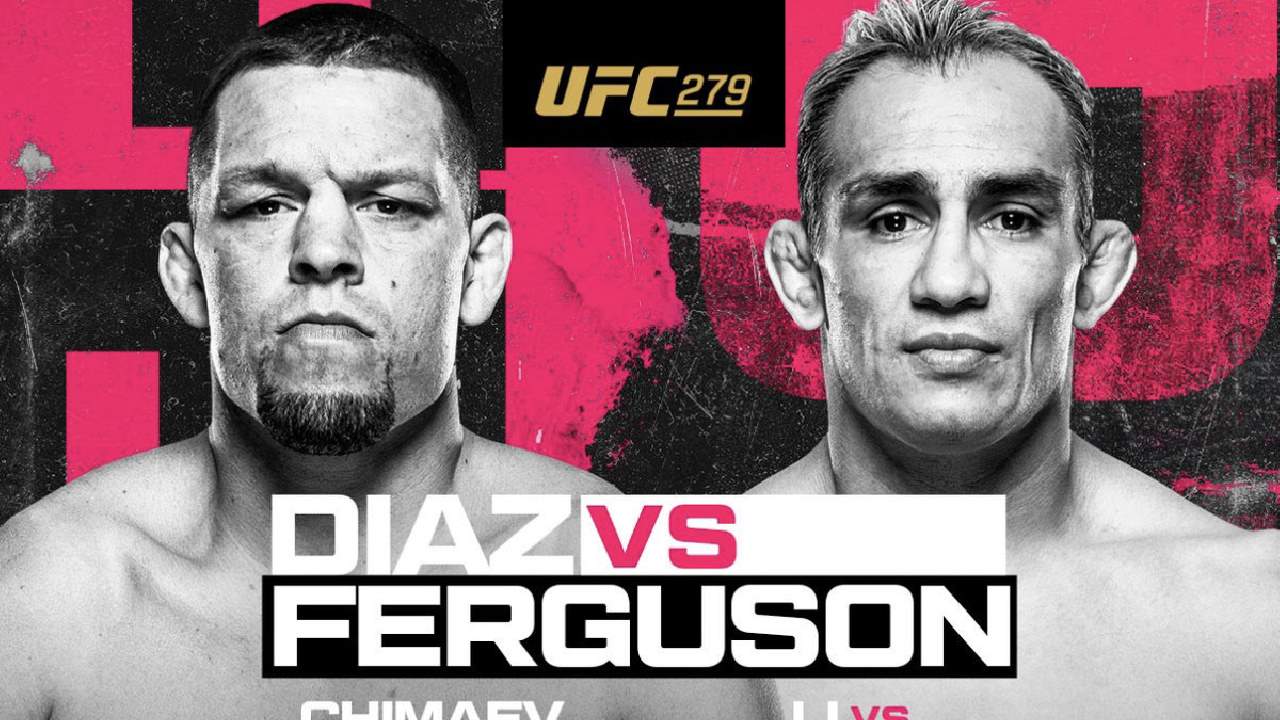 UFC 279 takes place tomorrow night in Las Vegas and we’ve got our updated predictions for the fights after several match-ups were switched up on the eve of the event!

It’s been a wild 48 hours that’s resulted in a complete switch-up of opponents in the top three fights on the card, and we’re now left with a five round main event that’s actually far more fair and competitive than the originally scheduled one, featuring two former long-time lightweight legends in their late 30’s coming off significant losing streaks at this relatively late stage in their careers.

It has all the makings of a closely contested scrap and heading into it Diaz certainly has the edge as far as durability goes. However, while Ferguson was knockout out badly against Michael Chandler, he actually looked better than anyone had anticipated in the opening round striking exchanges, and I think his speed, creativity and versatility with punches, kicks and those sharp, cutting elbows of his could play well against Diaz’s slower, orthodox volume-based boxing.

Both men have used their strong cardio reserves to wear down opponents in the past, but that won’t be the case here so I’d expected a competitive battle for the full 25 minutes, and it may well be a blood affair as at this stage in their careers both are prone to having old battle scars re-opened.

The two veterans are also very capable on the mat, with Ferguson being the better wrestler, while Diaz submission game is dangerous. I have a feeling that both will prefer to trade blows on the feet in this fight however.

I do have concerns about Ferguson’s chin here just a few months after that front kick KO loss, but Diaz doesn’t tend to have the biggest stopping power on the feet, so I think this one will go the distance and it’ll be Ferguson’s higher-energy style and more versatile array of attacks that will enable him to edge his way to a decision win.

The rearranged match-ups all fell nicely into place, but it has to be said that in the end it’s Holland who looks like he’s ended up being drawn the toughest hand here, moving up to co-main event status to go five rounds at a 180lb catchweight against the undefeated Chimaev.

Holland was the favorite in his originally scheduled match-up against D-Rod that looked set to be a stand-up battle, but now he’s a big underdog in what appears to be a terrible stylistic match-up for him.

Holland’s previous five-fight winning streak at middleweight came to an abrupt end in 2021 after his wrestling vulnerabilities became exposed in back-to-back losses, and soon after he dropped down to welterweight and got back to winning ways in fights that were more suited to his strengths.

However, he now finds himself going up against one of the most dominant wrestlers in the sport, and though he’s worked hard to try to shore up his wrestling issues the reality is that it just won’t be enough to stop someone of ‘Borz’ caliber.

That being said, though Chimaev is also a hard-hitting striker, Holland would welcome the opportunity to exchange on the feet as he’s a talented fighter with a 6″ reach advantage who will use that to try and keep his opponent at the end of his own powerful punches.

I fully expect Chimaev to revert to his wrestling here though and so Holland’s best hope may be to just simply survive the first few rounds and hope to drain his opponent’s cardio for the final rounds, but I think that’ll be easier said than done as ‘Borz’ mauls him with ground-and-pound and locks in a submission finish within two rounds.

Unfortunately the remaining two fighters in this switch-up have ended up in a bit of a size mismatch as Rodriguez came in at 179lbs for 180lb catchweight fight with Holland, while Jingliang tipped the scales at 171lbs for his previously arranged fight with Ferguson.

Nevertheless, these are two welterweights at their core and Jingliang was willing to accept the unfortunate size discrepancy in order to stay on the fight card.And it’s a fight that feels well-balanced under the circumstances.

Rodriguez has very solid boxing ability and pushes a good pace, throwing with both respectable power and volume, while also having the confidence that comes with having never been finished in his career.

Jingliang is the harder hitting striker of the two and like Rodriguez has a good chin, but he doesn’t piece together his strikes as well as D-Rod, instead being more likely to load up on his big power punches.

Jingliang also likes to mix in wrestling at times, so it’ll be interesting to see if he looks for that here, though he’ll have to be mindful of his opponents submission threat.

I expect a closely fought fight here, but I’m leaning towards Rodriguez to fight at a good tempo and be cleaner and more consistent with his offense to emerge with a decision victory.

Aldana is coming off a good TKO win over Yana Kunitskaya, which leaves her ranked No.4 in the division, while the 10th ranked Chiasson managed to edge out Norma Dumont on the scorecards via split decision.

Aldana may not be the most agile bantamweight, but she makes good use of her solid boxing fundamentals and carries the kind of stopping power in her hands then many of her peers will be envious of.

In fact, Aldana has actually secured 7 finishes via strikes from 13 career victories, and that includes a big first round knockout of another top contender Ketlen Vieira in addition to also putting Kunitskaya away inside the first five minutes as well.

Chiasson will hold a 4″ reach advantage over Aldana, but her striking isn’t as technical as her opponent and she prefers to battle it out at close quarters and from the clinch.

I think that kind of approach will lead her into Aldana’s heavier-handed blows though, which will throw her off her game and pave the way for Aldana to win on the scorecards.

These two 205lbers have been having a tough time in the Octagon of late, with Walker getting off to a good start in his UFC run, but now having lost four of his last five bouts, while Cutelaba only has a win and a draw to show from his last five appearance.

At heart these are two all-action fighters who start quickly, but in Walker’s case the unpredictable, aggressive style that saw him score some big highlight-reel finishes has been toned down significantly since joining the SBG gym in Ireland.

Nowadays Walker is a more cautious fighter who tries to make more use of his range and look to counter-strike at times.

It makes sense in some ways as he’s a very tall, long fighter who will have a 5″ height and reach advantage on Saturday night, but he just doesn’t seem comfortable with this new approach and to make matters worse, there’s now major question marks about his durability, with his recent losing slump being bookended by 1st round losses via strikes, including a brutal first round KO defeat against Jamahal Hill last time out.

Unlike Walker, Cutelaba has shown little interest in diverting from his own kill-or-be-killed style, even though it’s not been working out too well for him of late. Cutelaba always starts fast and will come out swinging for the fences, while he’s also just as aggressive when it comes to attempting takedowns and finding a finish on the mat.

To be fair to him, he does have a strong finishing record via strikes, both on the feet and on the mat, but he’s also been finished three times in the first round in recent years and his threat tends to diminish in the later rounds due to the energy he expends early on.

Both fighters have a real chance of stopping the other here, but I think Cutelaba’s constant forward pressure and takedown threat will put Walker on the back foot and limit his own offense, and I have real concerns about his chin holding up to the kind of bombs that ‘The Hulk’ will be hurling his way, so I’ll take Cutelaba to emerge with a first round TKO win.