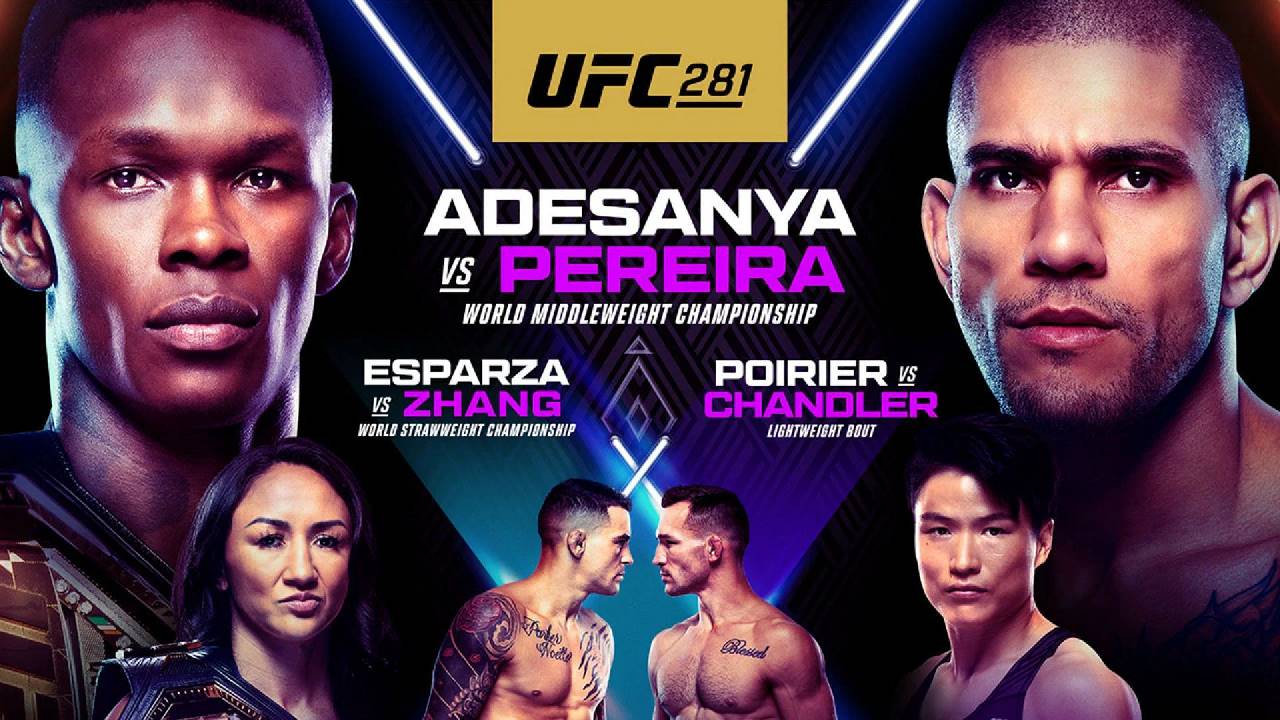 UFC 281 takes place tomorrow night in New York City and we’ve got our predictions for all the fights below.

Unbeaten in his 23 MMA middleweight fights, Adesanya now looks for his 6th title defense against an old nemesis in the shape of Alex Pereira, who infamously holds two victories over him in kickboxing, with the last being by way of KO back in 2017 before his move to the UFC.

If you hadn’t seen those fights it would be easy to assume that Pereira is just the better fighter, but watching them back it’s clear that’s not necessarily the case.In fact, there’s a strong case to be made that Adesanya should have won by decision in the first highly competitive fight, while in the second encounter Adesanya was in the ascendency for the first two rounds and even forced Pereira into a standing eight-count, before going on to be KO’d early in the third with a thunderous left hook.

What stood out in those two fights was that while men are very high-level kickboxers, Adesanya seemed to be better defensively, reading his opponents strikes well on many occasions to make him miss. That was perhaps magnified by the fact that Pereira is more of a power-puncher, throwing venom with every strike, but relying more on hooks and looping strikes that are slower to reach their target.

On the other hand, Adesanya’s boxing seemed more refined, finding the mark more often as he worked to the head and body effectively, showed more willingness to utilize the jab and varied up the speed and power of his attacks.

Of course both men were also utilizing very good kicks, with Pereira’s technique being particularly good, while he also demonstrated a good chin in the second fight in particular.In the years since Pereira continued to have great success in the kickboxing ring, becoming Glory’s middleweight and light-heavyweight champion before finally focusing full-time on MMA last year, while Adesanya has had several years head-start in adapting and expanding his skill-set for mixed martial arts.

As such, even though it’s far from his skill-set it’s possible he could look for clinch work, wrestling or even submissions to throw his rival out of his comfort zone, though I suspect it’s unlikely to be his main focus.

So, Pereira will have the high-ground from a mental standpoint here given that he’s won the previous two fights, and he does also appear to be the heavier hitter of the two, with particularly lethal hooks.

However, I’ve seen enough to believe that Adesanya has the ability to defeat him, as he has a more refined approach both offensively and importantly defensively that benefits from a higher fight IQ and a strong command of distance management in the Octagon and faster, cleaner punches that should enable him to be evasive while still outlanding his opponent enough over five rounds to emerge with a competitive decision victory.

Two victories over Rose Namajunas have enabled Esparza to claim the strawweight title on two separate occasions, but to make her first successful title defense she’ll have to get past another former champ in Weili, who KO’d Joanna Jedrzejczyk last time out.

Esparza has developed her striking a little over time, but she still essentially has a low output/impact approach on the feet. There isn’t much of a finishing threat for the champion on the mat either, but her strong wrestling ability enables her to land key takedowns and control her opponents for extended periods to eek out a win on the scorecards rather than go for glory via strikes or submission.

Meanwhile, Weili is certainly the more well-rounded of the two as well as presenting much more of a finishing threat, particularly on the feet where she’ll apply constant pressure with high-volume combinations of strikes thrown with solid technique and power.

Weili’s takedown defense isn’t impenetrable, but she’s comfortable on the mat, whether wrestling or hunting for submissions and utilizing ground-and-pound and has excellent cardio too.

Overall I just feel this as a really bad match-up for Esparza and I can see her struggling to make much headway in the wrestling department against the physically strong and capable Weili, while the Chinese star will press home her major striking advantage early and often on her way to a second round TKO finish.

This could be a potential show-stealer between these two entertaining lightweight stars, with former interim champ Poirier returning to action after losing out by submission in his title fight against Charles Oliveira, while Chandler suffered a TKO loss to ‘Do Bronx’ last year, but has since picked up a knockout win against Tony Ferguson.

Both men relish a good striking battle and fight at a high tempo, but their striking style differs.

Poirier is the more cerebral technician, picking out clean, accurate combinations with good footwork. He has good power, but it’s the mix of speed, timing and volume that’s most likely to lead him to a finish, while he can trust on his cardio to keep the pace up for the duration of the fight if he can’t get the stoppage.

There’s less depth to Chandler’s striking style, but he has more raw punching power than his opponent and he’ll apply pressure while looking to land big and secure a finish. He’s been successful in that regard on numerous occasions, though he’s also no stranger to getting into a lengthy dog-fight and while he can be rocked he does have the heart and determination of a champion.

Chandler’s striking benefits from the fact that he’s also a good wrestler who can transition to takedowns and work for heavy ground-and-pound or submission attempts. It’s an avenue he could pursue here as ‘Poirier’s own wrestling isn’t as strong, though he is a very capable grappler who can find opportunities to scramble back to his feet.

It should be an action-packed fight and could go either way. However, unless Chandler commits fully to a wrestling gameplan I feel that the fresher Poirier’s more varied, accurate striking and faster footwork will help him to edge out the frequent exchanges and lead to a third round TKO finish.

The 41-year-old Edgar has confirmed he’ll retire after this final swansong at Madison Square Garden, where he’ll go up against Gutierrez, who is a decade younger than him and is unbeaten in his seven UFC fights so far.

So this is not an easy fight to send the former lightweight champion off into the sunset on a win.  In many respects Edgar is still the fighter he was in the past despite his age. Perhaps his reactions and speed aren’t as sharp as they once were, but he’s still a very well-conditioned fighter with an excellent gas-tank who employs an active in-and-out striking style to pepper his opponents with strikes from the first minute to the last, while he’s also a very assured wrestler when he chooses to use it.

However, it’s been very evident in recent years that Edgar’s durability has taken a major hit, starting with his first ever KO loss to Brian Ortega in 2018 that’s since led to him also being TKO’d by ‘The Korean Zombie’ the following year and then back-to-back KO losses against Cory Sandhagen and Marlon Vera in 2021.

His opponent Gutierrez won’t match Edgar’s volume, but he is an accurate and effective striker who has particularly good low kicks that have actually stopped opponents in the past, and that could be a concern her as ‘The Answer’ can be vulnerable to those kind of attacks.  Gutierrez is also quite sound defensively and has fairly respectable takedown defense.

I certainly see an avenue to victory for Edgar here if he seeks to just outwrestle Gutierrez.  It’s not certain that he will though and I do think it’s very risky for him to be trading blows in the Octagon at this late stage in his career when his chin is clearly compromised. As such I’m picking Gutierrez here to trouble him with leg kicks and then later switching his attacks upstairs to deliver a third round TKO victory.

With just one win from his last five fights, Hooker is now back up at lightweight fighting Puelles, who is on a five-fight unbeaten run in the promotion.

Hooker has taken quite a lot of punishment in some of these losses, but as bad as his recent record looks it’s worth remembering that all those defeats came against top-flight competition, including Dustin Poirier, Michael Chandler and Islam Makhachev at lightweight, before an ill-fated drop down to 145lbs last time out where he immediately came up against in-form rising star Arnold Allen, who beat him from pillar to post.

So I don’t think all these losses mean Hooker has become a bad fighter. He’s still a good action-orientated kickboxer and against Puelles he should enjoy a major advantage in skill, power and volume on the feet, in addition to having a 2″ height and 3.5″ reach advantage.

Hooker can operate on the mat at times too, but it’s something he’ll be looking to give a wide berth to on this occasion as the 26-year-old Puelles is a very slick, creative grappler who will go hunting for submissions and has an especially dangerous kneebar that’s already finished three opponents in the UFC.

Puelles is a specialist though and despite his strong winning record his level of competition hasn’t been overly impressive. As such I don’t feel he’s at the level of the other monsters Hooker’s been going up against of late and I think his superior striking ability and pressure will trouble the Peruvian fighter, leading to a second round TKO finish.