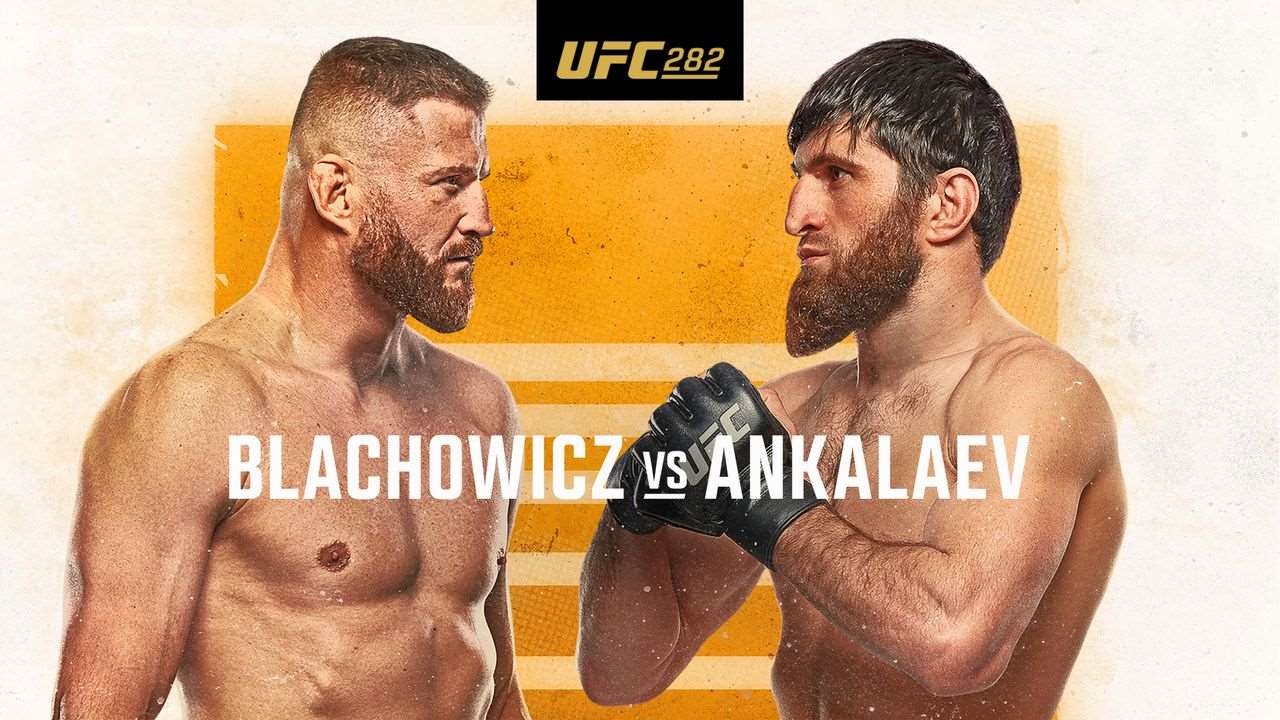 UFC 282 takes place Saturday night in Las Vegas and we’ve got our predictions for all the fights below.

An injury to Jiri Prochazka has led to his rematch with Glover Teixeira being scrapped from the main event of this card, leaving Blachowicz and Ankalaev to now rise up from the co-main event spot to battle for the now vacant light-heavyweight title in the evening’s headliner.

For the nearly 40-year-old Blachowicz it’s a chance to win back the belt he lost to Teixeira by submission last year, after which he picked up a TKO victory over Aleksander Rakic, while Ankalaev has more than earned his opportunity with nine UFC victories in a row.

This is really quite an evenly balanced fight, particularly on the feet. Blachowicz is a patient striker who is selective with his offense, but makes the most of it when he does land, throwing with good power and a particularly effective jab, while he can also mix in some solid kicks to the legs and body too, as well as being compact defensively.

Much the same can be said of the 30-year-old Ankalaev, who operates very effectively on the outside, though he’ll be at a 3″ reach disadvantage here. He’ll fight at a measured pace and mixes his combinations of punches and kicks well, while being effective on the counter and not taking too much damage in return.

Blachowicz has good takedown defense and is fairly comfortable on the mat with his submission ability, but I would say that Ankalaev is the more accomplished of the two there thanks to his strong wrestling game.

So the action is likely to be closely contested on the feet, but I do favor the younger man Ankalaev slightly here as he’s very assured and calculated with how he operates from distance, and together with his wrestling advantage I think that gives him just enough openings to eek out a decision win to become the new champion.

After three wins in a row since joining the UFC, Pimblett’s rising star power and the collapse of the original main event has seen his fight against Jared Gordon unexpectedly bumped up to co-main event status.

Despite his fast rise to prominence in the promotion, picking up a TKO win, two submission victories and three ‘Performance Of The Night’ bonuses along the way, it’s not been all plain sailing for Pimblett so far. In fact, several times during his UFC wins the 27-year-old has found himself being rocked on the feet, while outside of the Octagon his tendency to balloon up in weight to as much as 200lbs has led to criticism and question marks about whether he can continue to live up to the hype as time goes on and his competition level increases.

Pimblett’s strongest suit is undoubtedly his grappling, being a real menace on the mat with his skilled scrambling and instinctive knack for locking in fight-ending submissions. On the feet he’s less accomplished though, and so while he’s certainly got power in his hands and is more than willing to trade blows, he negates his defensive responsibilities and as such is extremely hittable.

Meanwhile, the 34-year-old Gordon has won four of his last five fights in the promotion, but while he is a fairly well-rounded, well-conditioned lightweight, like Pimblett he is not without his flaws. He’s not proven to be much of a finishing threat in the UFC and will be at a significant 5″ reach disadvantage here, and he was also KO’d twice and TKO’d once earlier in his UFC run between 2018-2019, in addition to also being submitted by Grant Dawson earlier this year.

As such it feels like a favorable match-up for Pimblett, though not one he can take lightly. On the feet he should be durable enough to take some of Gordon’s shots and deliver his own heavier blows if required, but as with many of his fights I think the quicker he can get the fight to the mat and do what he does best the better, leading him to a second round submission victory.

Prediction: Paddy Pimblett to win by submission in Rd2

Coming off two split-decision losses in a row, Ponzinibbio was originally scheduled to fight Robbie Lawler, but he withdrew at the start of fight week and so now Morono steps in on short notice, having won his last four fights.

The fact this is being contested at 180lbs suggests Morono isn’t fully in fight shape, so it’ll be interesting to see how he fares as this fight goes on as it should be a relatively fast-paced striking battle between these two.

Despite Morono having the better recent record it’s still worth noting that Ponzinibbio has fought the higher level of opposition over the course of his UFC run, with Morono’s biggest win coming at the start of his current winning streak when he TKO’d a version of Donald Cerrone, who by that stage was very much a shell of his former self.

Nevertheless, Morono is a rugged, durable striker who may not have the cleanest technique, but makes up for it with his aggression and high output, while though he doesn’t often look to go to the mat he actually is a BJJ black belt.

Ponzinibbio is the slicker, more technical striker here though and I think he’ll find success operating on the outside, landing leg kicks and comfortably matching his opponent’s early volume, while having a full camp behind him should enable him to push the pace more in the later rounds to ensure he secures a decision win.

Darren Till vs. Dricus Du Plessis

Till has lost four of his last five fights and is coming off over a year out as he prepares to fight du Plessis, who has won all three of his UFC fights so far, including two by KO.

Back in 2018 Till was challenging for the welterweight title, but with his 30th birthday approaching later this month it feels like he’s really lost his way.

His troubles are almost too lengthy to list at this stage, but even this year alone he’s suffered from injury problems that have kept him from competing, while he’s admitted to battling with depression, was penalized for drink-driving in Sweden, and just recently indicated that he’d told the UFC that he doesn’t want to compete in five round fights any more.

It’s unfortunate as when he’s on form Till is a talented striker who can deliver combinations of punches and kicks with authority.  He doesn’t have the same swagger these days that he did in his initial run down at welterweight though and he tends to fight more cautiously now and with less volume as he looks to conserve his cardio.

Meanwhile, the 28-year-old du Plessis is an all-action striker who keeps a crazy pace with very high volume striking and he also wields fight-ending power, though earlier in his career he was more known for finishing fights by submission.  In fact, in his 19-fight career, du Plessis has only been to the scorecards once, and that was in his last UFC outing, which he won.

Till is skilled enough that he could make du Plessis pay on the feet for being overly aggressive, but I just really don’t have any confidence in him these days, both mentally and physically, and think that he’ll struggle to deal with the South African’s pace and intensity, leading to a second round TKO finish.

Prediction: Dricus du Plessis to win by TKO in Rd2

Major featherweight action here as two undefeated fighters go head-to-head, with Mitchell having a 15-0 record and six UFC wins to his name, while Topuria is 12-0, with three of his four wins to date having come via KO.

These two are not flattering to deceive as they are as talented as there records suggest.  In the 28-year-old Mitchell’s case it’s his relentless wrestling and grappling ability that’s his strongest suit. Prior to joining the UFC he was tapping almost every one of his opponents out, and while that’s not continued to be the case so far in the Octagon, the fact that his sole submission so far was a rarely seen twister speaks to his skill level.

Mitchell has also worked on his stand-up skills and showed the value of that when he dropped Edson Barboza in the first round last time out.  So he won’t necessarily be afraid to strike with the 25-year-old Topuria, but he certainly will need to respect what he brings to the table as he’s a very well-versed boxing technician who picks his shots well and has serious finishing power for the weight class.

While his knockout finishes have grabbed the headlines, earlier in his career Topuria also showed off good submission ability too, and in fact that’s still where the majority of his stoppage wins come from – and combining the two together leaves him with only one career fight having gone to the scorecards.

So this has all the makings of an extremely competitive fight and as such it’s hard to pick between them.  In the end I’m leaning ever so slightly towards Mitchell here as I do think he can get the better of the grappling exchanges, while his pace and pressure will limit Topuria’s opportunities on the feet, leading to a narrow decision victory.