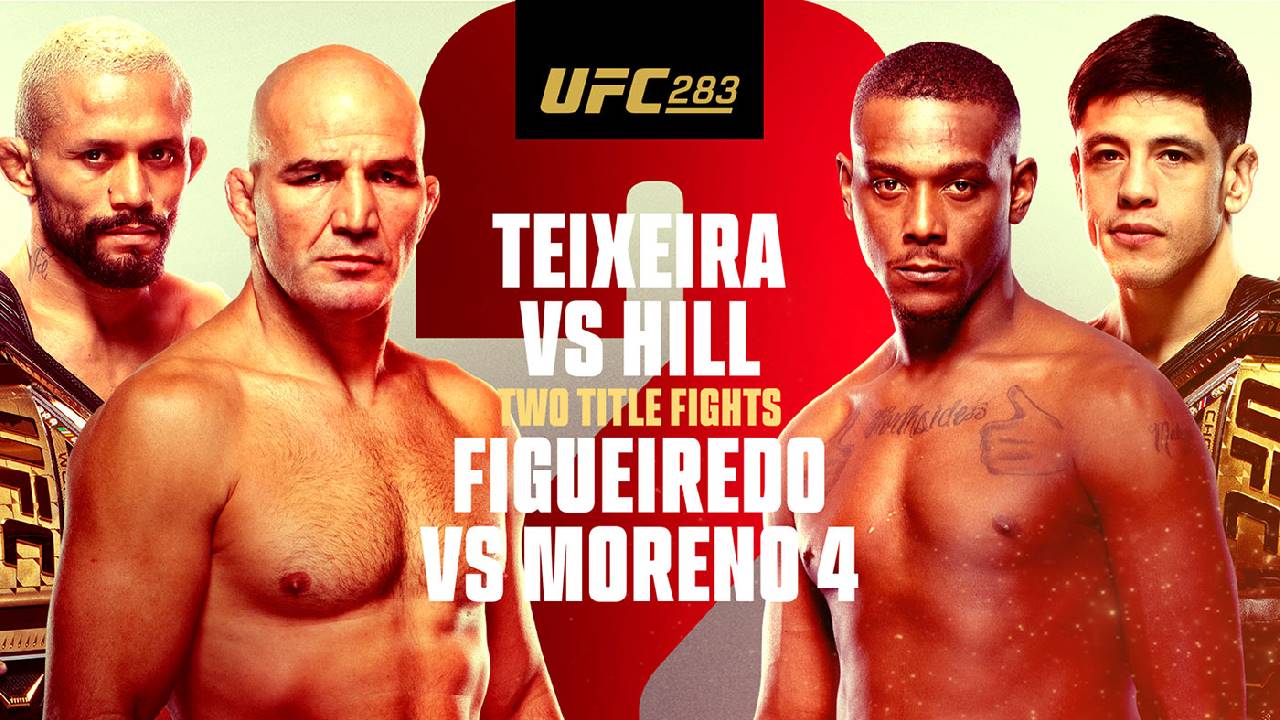 UFC 282 takes place Saturday night in Rio de Janeiro, Brazil and we’ve got our predictions for all the fights below.

Teixeira has been defying expectations in his 40’s by not only going on a six-fight unbeaten streak, but also winning the 205lb title in 2021, only to then lose it to Jiri Prochazka via submission in the last 30 seconds of a fight he was on the verge of winning.

With Prochazka now out injured for an extended period and a fight for the vacant title between Jan Blachowicz and Magomed Ankalaev failing to produce a clear winner, Teixeira now has a chance to reclaim the belt against Hill, who has won his last three fights in a row via strikes.

So needless to say Hill is a very dangerous striker and as well as being 12 years younger than the 43-year-old Teixeira he also has a 2″ height and 3″ reach over him too as he looks to use those long limbs to land frequent, fast and hard-hitting punches from range, while in closer his elbows are a big threat too.

Teixeira has proven to be a fearsome striker in his own right during his long run in the sport, but as he began to show signs of slowing down and being less durable in the twilight years of his career, he wisely pivoted more towards using his very good wrestling and submission ability to get the job done, and for the most part it’s proven to be a winning strategy.

Of course Teixeira’s over-eagerness to go to the mat actually cost him dearly last time out, gifting Prochazka a golden opportunity to seize upon a dramatic fight-ending submission, but that felt more like a lapse in judgement and concentration from the veteran rather than a lack of skill.

Hill is very much a striker and if he can keep this one standing and put Teixeira’s aging chin on the end of his long strikes then he has a big chance to take home the title.  However, his takedown defense isn’ the best and he won’t have much to offer Teixeira on the mat, so I fully expect Teixera to exploit that as early as possible and go on to secure a second round submission finish, if not in the first five minutes.

Prediction: Glover Teixeira to win by submission in Rd2

Current flyweight champion Figueiredo must surely be haunted by the groin strike he threw in the first fight against Moreno that caused a point to be deducted, leading to the majority draw verdict that’s ultimately resulted in a four-fight series between the two, with both now having a win over the other as they head into this quadrilogy encounter.

The match-up remains as compelling as ever as they are both so evenly matched both on the feet and also very competitive on the mat, while being able to fight from start to finish at a frantic pace.

Figueiredo still wields the bigger power of the two and has an effective kicking game to complement his punches. Meanwhile Moreno focuses more on his robust boxing ability and is also very durable and has an endless gas tank, though he also showed off his own kicking power last time out to finish Kai Kara-France with a body kick.

Moreno certainly didn’t have it all his own way against another tough striker in Kara-France though, and that might give Figueiredo some added sense of confidence here, though at the same time he himself has sat out of action for a year and at 35 is technically past his prime, even if it’s not shown in his performances yet.

In the end I slightly favor Figueiredo here. We saw him drop Moreno a few times in their last fight and with the power he has there’s every chance that could happen again, which will play well with the judges, even if Moreno does show off his strong chin to keep fighting like it never happened.

Also, Moreno has had to deal with major disruption in the middle of this fight camp due to his coach James Krause being suspended as the result of a major betting scandal.  That’s a serious blow, especially given that his success could hinge on the strength of his gameplan, and so that, together with the fact he’ll have to face his rival in his own homeland leads me to think that it’s Figueiredo who will have the edge and emerge with a decision victory.

Burns gave Khamzat Chimaev the toughest fight of his career to date a year ago, but ultimately lost by unanimous decision and now fights Magny, who secured a submission win over Daniel Rodriguez just a couple of months ago.

These are two very well-rounded fighters and that poses a problem for Magny as he’s often able to use his jack-of-all-trades skill-set to expose the weaknesses in his opponent’s game, but that’s easier said than done in this instance.

Burns is the better striker of the two with a speed advantage, better punching power and solid kicks, while he’s also the far more skilled grappler too with a serious submission game.

Magny is very capable in both of those regards, but he’s not on the same level and isn’t as dangerous, while he’s also been somewhat susceptible to submissions in the past.

What the veteran does have however is a massive height and reach advantage over the former lightweight, being 5″ taller with a whopping 8″ reach advantage, so his best chance will be to keep Burns at bay with a steady diet of straight punches and kicks.

Burns is a gritty fighter though who will constantly be looking to press the action and I don’t think Magny has the power to deter him.  So he’ll be able to get into range to land the more meaningful blows, though I think he’ll find even more success taking him down, leading to a second round submission finish.

Prediction: Gilbert Burns to win by submission in Rd2

Murphy picked up a big win over former bantamweight champ Miesha Tate in what was her opponent’s flyweight debut last time out, while Andrade is coming in off back-to-back wins over Cynthia Calvillo and Amanda Lemos.

The 39-year-old Murphy is a tough, wily veteran as she proved with that convincing win against Tate last time out, although it has to be said that her high-profile opponent looked particularly terrible in that fight compared to her heyday, back before she took a five-year hiatus from competing.

Murphy has a big size advantage here, being 4″ taller and with a 6″ reach advantage over the short, stocky Andrade, but beyond that it’s hard to see where she can gain an edge over the former strawweight champion.

Andrade makes up for her size disadvantage by being an absolute powerhouse, regardless of the division she’s fighting in. She’s physically strong, throws everything into her punches, lands huge takedowns and is an absolute mauler on the mat, yet despite all that exertion she also somehow manages to maintain her pace from start to finish thanks to her excellent cardio.

She can be beaten, but these days it’s usually only the elite of the division’s she’s competing in that are able to do so, and I don’t think Murphy is in that category and will have to rely on all her years of experience to avoid being finished here.

Craig managed to exceed many people’s expectations by going on a six-fight winning streak at 205lbs, but that finally came to an end with a decision loss to Volkan Oezdemir last time out. Now he goes up against Walker, who underperformed during a spell in which he lost four out of five fights, but has since picked up a submission win over Ion Cutelaba.

Craig has proven time and time again that he is a nightmare to deal with when he can get the fight to the mat. Everyone knows he’s going to hunt for his tried-and-tested triangle choke finish, yet somehow he still finds a way to get it.

However, Craig isn’t a good wrestler so he relies on either rushing into a trip takedown, pulling guard or buttscooting across the Octagon to try and get the fight where he wants it, and as Oezdemir proved last time out, if your able to steer clear of that then you can end up making him look foolish and school him in the striking department.

Walker has had his own issues after a move to the SBG camp in Ireland resulted in him heavily reigning in his often reckless but potent striking tendencies that had earned him some big wins at first, but then also some equally big losses too. Walker appeared very uneasy with his new cautious approach though, but there have been signs he’s starting to find more of a balance.

Walker still doesn’t feel like the kind of fighter that makes the smartest decisions in the Octagon though and that could be a problem here as any blunder could present Craig the opportunity he needs to pounce on a submission finish. Nevertheless, as the superior striker with a 2.5″ height and 6″ reach advantage, together with being the more athletic, fleet of foot fighter here, I think the Brazilian can find success keeping Craig at a range for a couple of rounds and then put him away via a third round TKO finish.

Prediction: Johnny Walker to win by TKO in Rd3