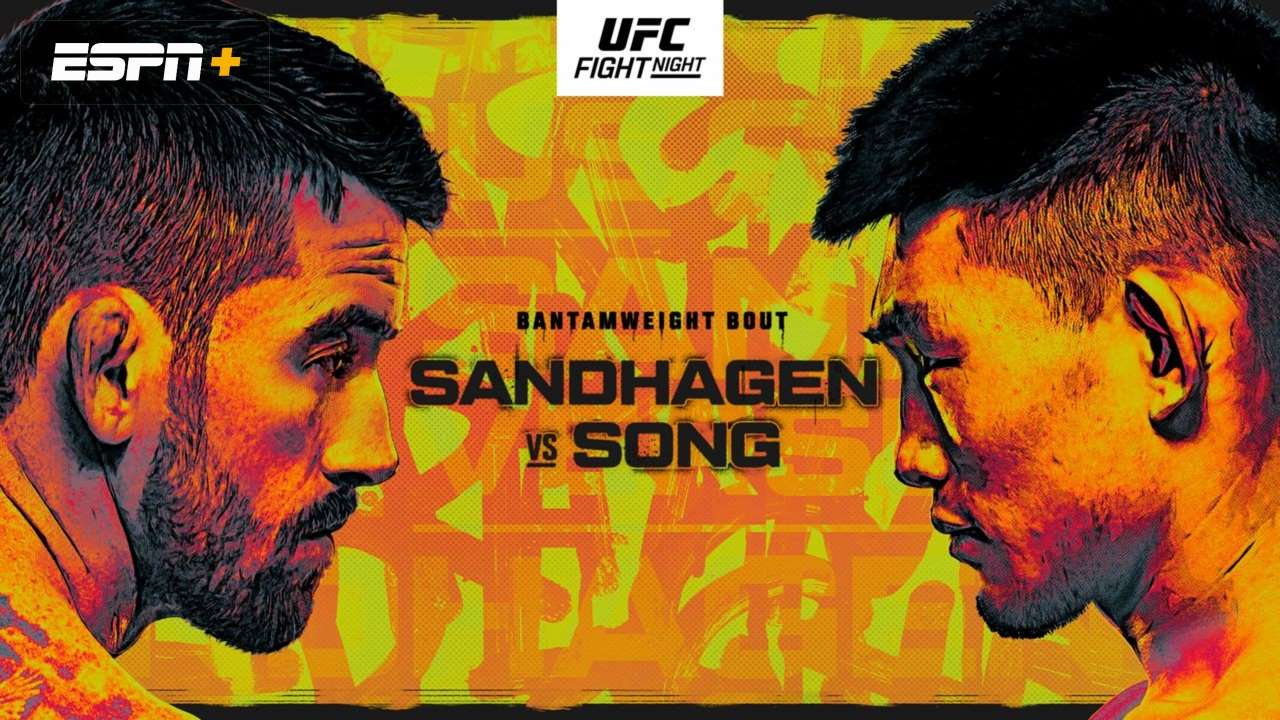 UFC Fight Night 210 takes place tomorrow night in Las Vegas and we’ve got our predictions for all the fights below.

Sandhagen was unsuccessful in his attempt to win the interim bantamweight title against Petr Yan last time out and now goes up against Yadong, who is currently on a three-fight winning streak.

Sandhagen is a talented stand-up fighter who unleashes a high-volume, yet potent striking style from range with good kicks backing up his solid punches, aided by a 3″ height and reach advantage here. The 30-year-old can also mix things up nicely on the mat too when required.

Yadong is still only 24-year-old despite already having a five-year UFC run under his belt, going 8-1-1 during that time. He’s every improving, though his strongest suit is certainly his boxing, where he demonstrates both good speed and power in his punches, while also benefiting from having a sturdy chin. He is somewhat capable on the mat too, though he’s not nearly as assured their as he is on the feet and so he’ll be hoping to maintain a striking battle here.

There’s good reason to believe that Yadong is going to be an important player in this division for years to come, but though he will put up a very competitive showing here I feel that Sandhagen at this stage is still a big more well-rounded and will be more effective at range, making good use of his kicks, to edge out a win on the scorecards.

Njokuani’s started his time in the UFC strongly with two KO’s in the first round, while Rodrigues has gone 3-1 so far in the promotion and also claimed a first round KO in his last bout.

Rodrigues foundation is actually in BJJ and he’s excels in that regard, but in the Octagon he much prefers to just keep the action on the feet, where he can press forward and utilize his solid boxing ability and that big stopping power in his hands.

It’s largely been a successful strategy for him so far, but it feels like his ceiling would be higher if he would mix more of his grappling ability to compliment his striking, and that’s particularly true in a match-up like this where he’s going up against a very striking-orientated opponent, and a dangerous one at that.

A former muay thai kickboxer who went on to have a lengthy spell in the Bellator promotion, Njokuani has a fast, dynamic and hard-hitting striking style and he’ll enjoy a 5″ reach advantage here to, but he doesn’t have much to offer on the mat.

So the path to victory is clear for Rodrigues – take the fight to the mat where a relatively easy victory likely awaits. I’m picking him to win by first round submission for that reason, but somewhat reluctantly as I could easily see an alternative scenario where Rodrigues is over-confident in his striking ability and either opts to not go to the mat at all, or only goes for a takedown if he’s in trouble on the feet – and with Njokuani’s ability to finish fights with a single strike that would be a very risky strategy.

UFC veteran Fili has had a rough spell lately, having gone winless in his last three fights, including a 41 second TKO loss in his last appearance, while Algeo comes in on a month’s notice off of back-to-back wins.

Normally these two would have a notable size advantage as they are tall for the featherweight class, but in this instance they cancel each other out in that regard, with Algeo only being an inch taller, while Fili has an inch extra in reach.

Fili is the slicker technical striker of the two, showing good composure and working well on the counter, while maintaining a solid pace throughout the fight. He’s always been happiest on the feet, but he’s a fairly crafty grappler too if neccesary.

Algeo employs a high-volume striking style and makes up for a relative lack of stopping power with his fast tempo, toughness and cardio, which can enable him to outwork and outlast his opponents. However, he does have a significant weakness in terms of his takedown defense, though he’s actually a solid wrestler on top and can work off his back with submissions or scrambles back to his feet.

This isn’t an easy one to call, particularly as Fili is in a bit of a slump and might also prefer to strike rathre than take full advantage of Algeo’s weak takedown defense.

Algeo may not be as sharp technically on the feet as Fili, but I think his dogged determination to continue pushing the pace, staying more active offensively and showing good durability will enable him to stand out enough to win a close fight on the scorecards.

This fight feels like it doesn’t belong on the main card with Pyfer being a newcomer off the Contender Series with a 9-2 record, while Amedovski is clinging onto a place on the roster by his fingertips after suffering three losses in a row since joining the promotion.

To be fair, Pyfer shows some promise as he’s a big, physically strong fighter who has shown notable finishing power, particularly with his left hook, while he’s also fairly well-rounded with respectable wrestling and some submission ability too.

On the other hand, despite a reputation for being a heavy-handed finisher prior to joining the UFC, since stepping into the Octagon Amedovski just hasn’t looked good at all and in his last two fights has been KO’d in 17 seconds and then submitted in 64 seconds.

So this looks very much like Amedosvki is being kept around to hand Pyfer his first win in the promotion and I expect him to do just that, with Amedosvki’s sloppy striking leaving him open to get hit by big strikes for a first round TKO victory.

After losing two fights in a row, Boser bounced back with a KO finish against OSP in his last fight and now goes up against Nascimento, whose three fights in the UFC so far have resulted in a win, a loss and a no-contest.

Though he’s shown knockout power in some of his more recent victories, Boser tends to be more of a volume striker for the most part, managing to maintain a solid output of punches and low kicks throughout a 15 minute fight without slowing down, while he’s only been finished by strikes once in his 29-fight career.

Nascimento suffered a 45 second KO loss in his second UFC fight back in 2020, but he got back to winning ways with a TKO victory on the feet in in his most recent fight last year, only to see it then taken away and replaced by a no-contest ruling after being hit by a dubious USADA suspension, which came about due to taking Ritalin – something he’s since received an official exemption to use in the future due to a medical condition.

So, Nascimento does have some basic striking ability, but it’s really his ground game that shines as he has good submission game that’s delivered six of his eight career victories to date.

Nascimento’s takedown ability isn’t quite as effective though and so I think Boser will be able to keep this fight standing where he will have a notable edge in terms of his striking ability and steady pace over three rounds to win by decision.