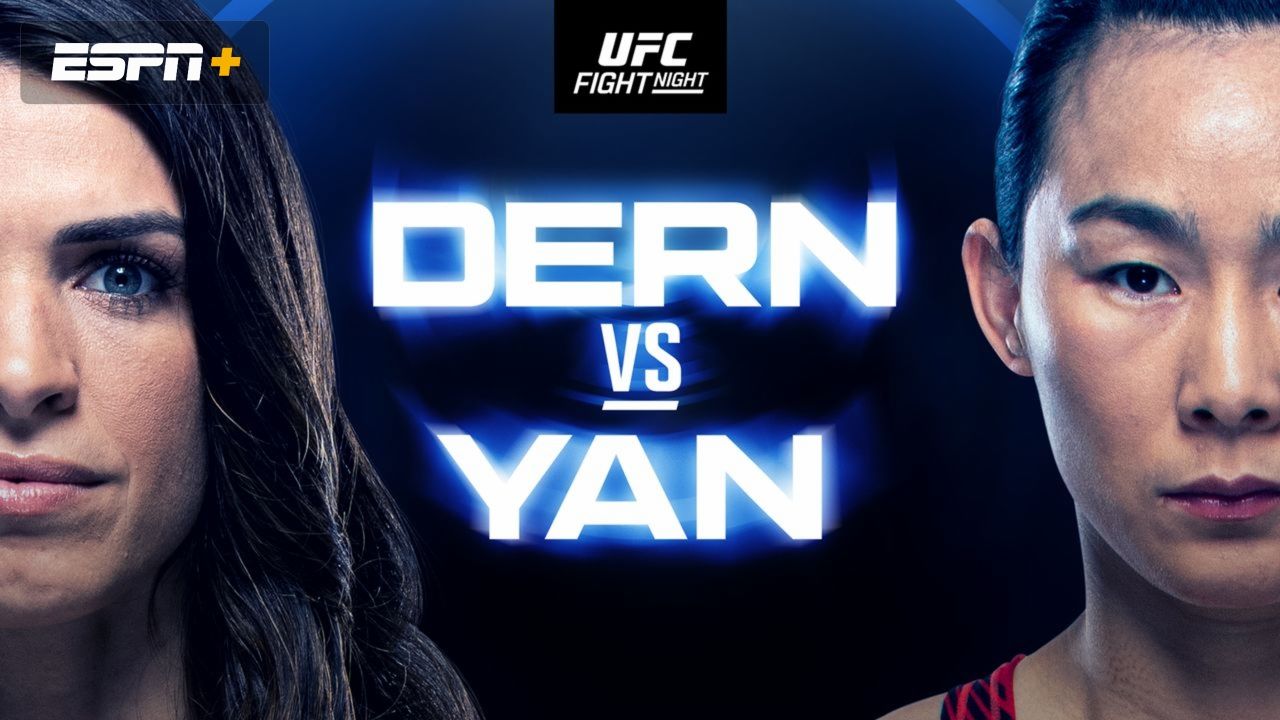 UFC Fight Night 211 takes place tomorrow night in Las Vegas and we’ve got our predictions for all the fights below.

Dern is coming off a split decision win over Tecia Torres, taking her to five wins from her last six fights, while Xioanan is coming off back-to-back losses, but had been on a six-fight winning streak prior to that.

Dern’s top-level Brazilian Jiu-Jitsu credentials are well known and she is a big threat to anyone she goes up against if the fight hits the mat, but her limited wrestling ability has meant that at times she’s struggled to get the fight there in the first place.

Dern’s striking has also left something to be desired, but it is something she’s clearly been working hard to improve and she is better than she used to be. Nevertheless, she’s still very much a work in progress on the feet and doesn’t have the comfort or fluidity you’d see from a more natural striker, though she is a physical presence and has power in her punches.

On the other hand, Xiaonan is at her best in the striking department and has good boxing together with fast footwork and so she’ll be looking to keep Dern at a safe distance with strikes from range in the hopes of limiting her chances of being taken down, where she’d be at a big a disadvantage.

If Xiaonan can stuff Dern’s early takedowns then she has a real chance here, but with five rounds to work with I do see Dern manufacturing a way to get her to the mat at some stage, perhaps via a scramble situation or even pulling guard rather than via a traditional single or double-leg takedown. And when she does get Xiaonan down I feel it’s only a matter of time before she locks up a submission. I’ll say she does so within two rounds.

After winning three fights in a row, Brown now gets co-main event status against a true UFC veteran in Trinaldo, who has won his last two fights.

Trinaldo appears to be defying time as at 44-years-old he’s still managed to win five of his last six fights. He remains a good athlete too, moving well and landing good kicks from range, while he also has speed and power in his punches too. That being said, he’s not completely immune to the aging process and so his volume of strikes has been cut back and he will slow a bit if the fight goes the distance.

It’s worth remembering that Trinaldo is a former lightweight, and actually it’ll be hard to forget that on Saturday night as the tall, lanky Brown will tower over him with a 6″ height and 8″ reach advantage. That suits Brown’s crisp boxing from range and he hits hard too, though he can still be caught himself and has been rocked often enough that it’s a cause for concern.

Nevertheless, 12-years his opponents junior at 32-years-old and with a major size advantage this feels like a dangerous, but winnable fight for Brown, who I think will be able to keep Trinaldo on the end of his punches for the most part to secure a decision victory.

After starting off his time in the UFC with five wins in a row, Barcelos has since dropped to two defeats on the scorecards, while Jones is four fights into his UFC run and is coming off back-to-back losses.

Barcelos has well-rounded skills, bringing an aggressive style on the feet and has never been stopped by strikes, while he’s also a good wrestler and credentialed BJJ player. However, alongside his recent couple of losses there’s been a sense that perhaps at 35-years-old, he’s now passed his peak and is now quite as sharp as he once was.

The 32-year-old Jones also has some versatility to his game, but is primarily a striker. He’ll have a 3″ reach advantage and does have heavy hands, but his activity levels offensively are lower than you’d like to see, relying too often on the counter-punch, and while he does have decent offensive submissions he’s not as effective defensively.

Overall I feel that this is a fight where Barcelos holds the advantage in multiple areas, and whether he opts to use his higher volume striking on the feet or dictate the action on the mat I expect him to battle his way to a decision victory.

Yusuff had been lined up for a high-profile fight with Giga Chikadze a couple of weeks ago, but his opponent withdrew and so he now looks to extend his 5-1 UFC record against the debuting Shainis, who has compiled a 12-3 record in his career to date.

Yusuff is a very athletic striker with good technique and the speed and power to be a real problem, while he also has solid takedown defense too. He’ll keep a good pace into the later rounds and shows good resilience if he does have to fight through some adversity.

Shainis fought for Bellator early in his career, picking up a couple of wins, but he spent the majority of his time fighting for Cage Titans. he’ll likely start fast and will look to bring the fight to Yusuff with a more brawling style and if he can get the fight to the mat he has solid ground-and-pound.

I think Yusuff will prove to be the more skillful, composed and physically gifted fighter here, proving to be too slick and too quick for the newcomer on his way to a second round TKO finish.

Castaneda is coming off two stoppage wins in a row after losing his UFC debut, and now fights Santos, who suffered a decision loss in his UFC debut back in April.

Castaneda is a solid all-rounder with a good wrestling game and is a proven submission threat too, while he’s comfortable employing a volume striking game with respectable power, though he’s not as effective defensively.

Santos likes to match forward behind a high guard and look to unleash big strikes. Castaneda will have been well warned about Santos penchant for spinning attacks in particular as three of his eight career wins have come via either spinning back kicks and elbows.

Santos has only fought once in the last three years, while Castaneda clearly has more momentum, and I believe he has the better skill-set too, with his wrestling in particular likely to be a key component here to get the better of his opponent and win on the scorecards.

Davis has been out of the Octagon for 19 months now, but was riding back-to-back wins prior to that and now goes up against a late replacement in Borschev, who is 1-1 in the UFC so far as comes in on two-weeks notice.

This is primarily a clash of strikers, with Davis being a good boxer with stopping power in his punches who will have a 1″ height and 3.5″ reach advantage, while Borschev is a former K-1 kickboxer who demonstrates assured technical ability and also has a reputation for finishing fights.

I could see Borschev having success with leg kicks here, but the problem is that he’s vulnerable to being outwrestled and though it’s not his preferred option, Davis will be willing to go down that route, especially if his lead leg is getting compromised.

If Borschev can keep it upright then I feel he has a real chance to edge out a closely fought stand-up battle, but I’ll take Davis’ broader skill-set to win out as he goes to his wrestling at times during the fight to bring home a decision victory.