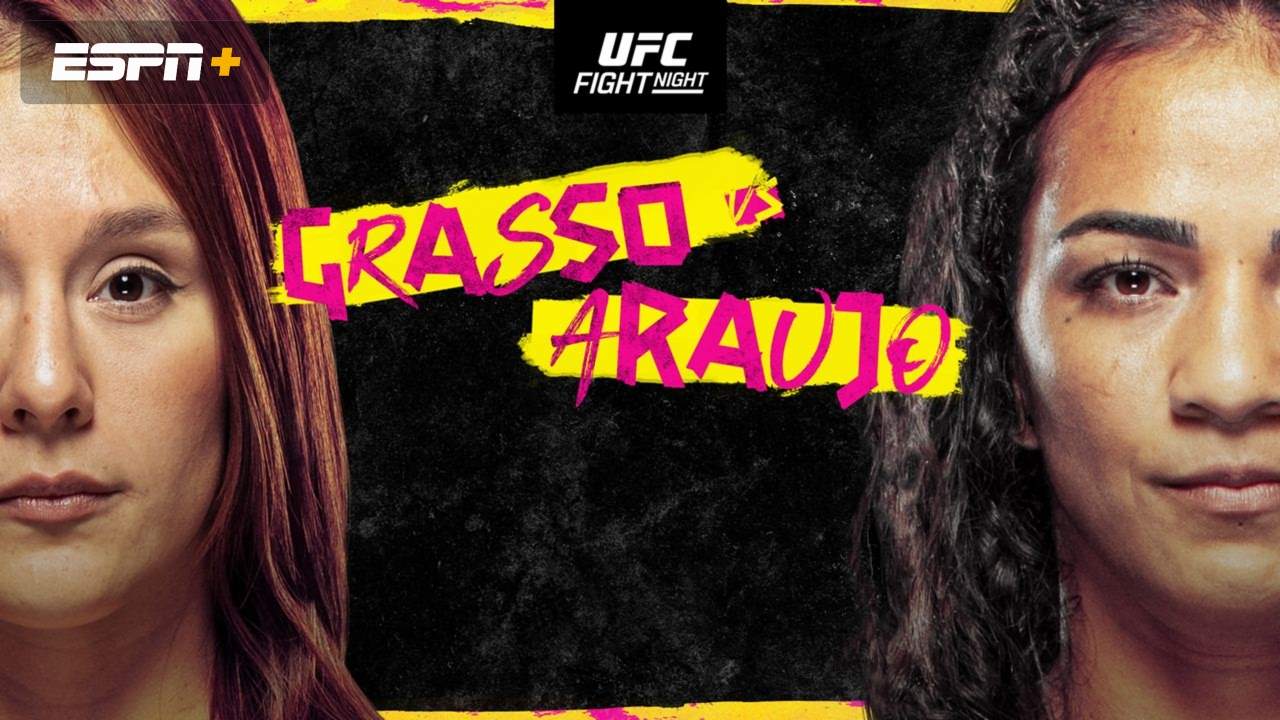 UFC Fight Night 212 takes place tomorrow night in Las Vegas and we’ve got our predictions for all the fights below.

Grasso is ranked No.5 after going 3-0 in the flyweight division so far, while Araujao is at No.6 after compiling a 4-2 record in the weight class.

Grasso initially joined the UFC as a strawweight with some hype behind her, but she struggled to live up to that at first, going just 3-3. However, though a move to flyweight didn’t immediately seem like a great idea since she’s undersized, it’s actually worked out well so far.

The 29-year-old Grasso seems more comfortable now and she’s looked good with her technical boxing ability that combines fast, accurate strikes with good footwork and cardio that makes up for her relative lack of power.

Grasso’s takedown defense isn’t the best and she can be overpowered on the mat against bigger, stronger opponents, but that doesn’t mean she’s not without skill as she did tap out Joanne Wood last time out.As for the 35-year-old Araujo, she is quite well rounded, but she primarily focuses on her striking. She doesn’t have Grasso’s slick technique, but she is more aggressive and carries respectable power. And she does mix in takedowns occasionally and on the mat she has solid BJJ that delivered some submission finishes early in her career, though it’s not something we’ve seen much of in her UFC run so far.

If Araujo really focused on her mat work in this fight then that could have a big impact on how the fight transpires, but I suspect she’ll be lured into the striking battle with Grasso, and I don’t think that’ll work to her advantage. Grasso might not hit as hard, but she’ll land with more volume and speed, while she also has the better cardio in what will be both fighters first five-rounder, leading her to a decision victory.

Swanson surprised many people when he opted to drop down to bantamweight for his next fight, despite having won three of his last four featherweight bouts. His first fight in this new division comes against Martinez, who is also in good form having won his last three Octagon outings.

Swanson is about to turn 39 next month which makes this late career division switch even more puzzling, leading to question marks about how he’ll cope with the weight cut and how it might affect his power. The fact that he had a teammate do the talking for him at Wednesday’s media so he could “rest his voice” didn’t inspire confidence either.

On a more positive note, Swanson has been drawn against a fellow striker, which he’ll no doubt welcome given that over the years his submission defense has been a thorn in his flesh, accounting for the majority of his career losses.

Potential weight cut issues aside, Swanson is still in very good physical condition for his age and can still maintain his high-volume offense striking style with crafty boxing ability being backed up by versatile kicks and good durability.

He faces a tough, younger opponent in the 29-year-old Martinez though as he’s also a skilled striker who punctuates his attacks with hard-hitting kicks and he also fights at a high tempo that will match that of his opponent.

I think we’ll see a closely contested striking battle here and it could go back and forth all the way to the final bell. However, when it comes to picking a winner I struggle to overlook the questions regarding Swanson’s drop in weight at this late stage in his career, especially when he’s going up against a younger fighter in his prime, and so I think Martinez wins the stand-up war, making good use of body kicks in particular to win by decision.

Meaningful flyweight action here with Askarov being the current No.4 who is looking to bounce back from the first loss of his 16-fight career, while the 5th placed Royval is coming in off back-to-back victories in 2022 so far.

Askarov can strike comfortably, but he’s always looking for opportunities to initiate takedowns as his strong wrestling game is his trump card, and takedown defense is an area that’s been known to be a weak point for his opponent.

However, Royval is not a fighter who is easy to contain on the mat as he’s constantly trying to make something happen from his back and he has a sharp submission game that accounts for three of his four stoppage victories in the UFC so far.

On top of that, former LFA champ Royval is also a fighter who embraces a firefight on the feet and he’ll throw in good kicks and spinning attacks into his offensive work.

That means this should be fairly competitive wherever the action goes, but I do feel that Askarov’s wrestling advantage will be the deciding factor here, enabling him to land multiple takedowns over the course of 15 minutes to win by decision.

It’s not been a good time for either of these two fighters of late, with Wright having suffered a KO, TKO and submission loss in three of his last four fights, while Todorovic also has gone 1-3 in his last four, including a TKO and KO loss.

Adding to the sense that this one will likely end inside the distance is the fact that when they are winning, both men are also doing so before the final bell, with all 12 of Wright’s wins being by finish on either the feet or the mat, while Todorovic has 10 finishes from 11 wins.

And there’s also a solid chance that the fight might not even make it out of the first round as Wright has only seen the second round twice in his entire career! That’s largely do to the fact that he’s primarily an offensively minded karate-based striker who is willing to take big risks in an attempt to land a fight-ending blow. That kill-or-be-killed hasn’t been working in his favor of late and has left questions over his chin.

Todorovic is a solid striker who does well on the attack and has good power, but while he’s less reckless than Wright, he has a bad habit of leaving his head in harms way, and like his opponent he doesn’t have the sturdiest of chins to protect him.

However, when he chooses to use it Todorovic is quite a capable wrestler and has heavy ground-and-pound, and his odds of winning will increase the longer the fight goes on, which will lead him to a second round TKO stoppage on the mat.

Cirkunov’s back is against the well as he comes in with just two wins to show from his last eight fights, while Menifield is coming off a first round TKO victory and has won three of his last four bouts.

The 35-year-old Cirkunov remains a dangerous fighter when he can bring his opponents down as he’s a good wrestler with excellent submissions, but there’s not much to his striking game these days and his punch resistance his diminished drastically, going from having never been stopped in his first 15 career fights to having now suffered four first round KO or TKO losses from his last six defeats.

That means Cirkunov simply can’t afford to spend any time trading blows with Menifield, who is a big light-heavyweight who moves well for his size and has proven finishing power in his hands, racking up nine stoppage wins from strikes from 12 victories.

In addition to that Menifield has good takedown defense, so unless Cirkunov can stifle him for extended periods in the clinch then I think this will end badly for him via KO or TKO in the first five minutes.

Prediction: Alonzo Menifield to win by TKO in Rd1