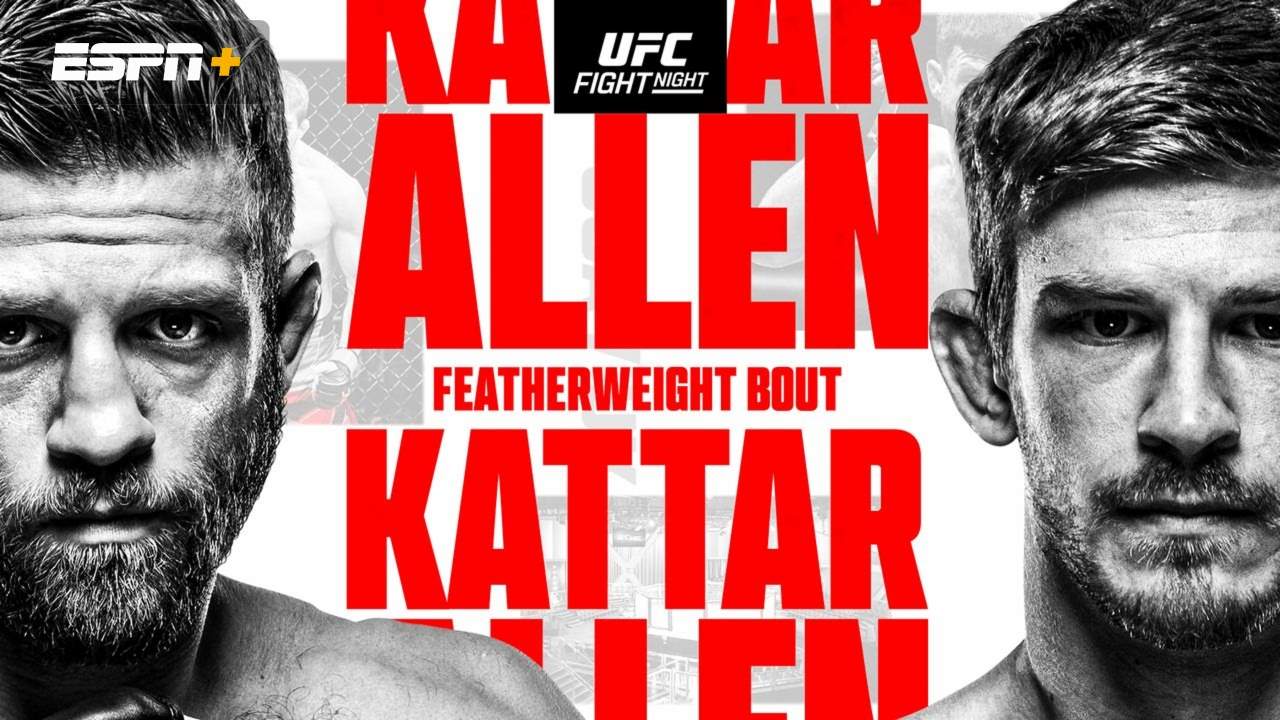 UFC Fight Night 213 takes place tomorrow night in Las Vegas and we’ve got our predictions for all the fights below.

After a somewhat controversial split decision loss to Josh Emmett last time out that many people thought he deserved to win, the No.5 ranked Kattar now fights the in-form Allen, who has won nine fights in a row.

Allen’s last fight against Dan Hooker was particularly notable as it saw him divert from his traditionally more calm, calculated style that would typically seem him operate at distance with clean, technical strikes. Instead, with his home fans in the UK roaring him on, Allen went on the offensive right away and rocked Hooker repeatedly in the opening few minutes with hard-hitting blows to secure an absolutely dominant TKO finish.

It was an impressive performance and showed there’s even more to his stand-up game than he’d shown in the past, and it should be noted that he’s also a surprisingly good wrestler for a UK fighter and can grapple effectively too.

So that makes Allen the more well-rounded fighter here, but Kattar makes up for that by having strong takedown defense, while on the feet he’s one of the division’s best boxers and has solid power behind his active offense output, and will enjoy a 3″ height and 2″ reach advantage here.

Kattar also has plenty experience of five-round fights now and has shown an ability to keep a good pace from start to finish, while he’s very durable too.

Allen doesn’t have that 25-minute experience, but he’s always been a well-conditioned athlete, so I don’t see that being much of an issue here, and with his broader skill-set I think he can mix in kicks into his striking work, while also using his underrated wrestling to help him edge towards a closely contested decision win.

Means lost by decision to Kevin Holland in June, but had been on a three-fight winning streak beforehand, while it’s a similar story for Griffin who had picked up three victories before suffering a decision loss to Neil Magny.

Means has been fighting in the UFC for over 10 years now, putting together a 14-10 (+1nc) record along the way. Even at 38-years-old he still remains a very tough, hardy competitor who likes to apply pressure and is particularly effective at close quarters and in the clinch with damaging elbows and knee strikes.

At 37, Griffin is getting up there in years too. He’s been in the UFC for over six years and while his 6-7 run might look unimpressive at first glance, his performances and results have improved over time. Griffin’s style is heavily focused on his boxing, where he carries respectable power and has a solid chin, while he can also mix in takedowns at times too.

I think this one is most likely to play out on the feet though and it should be a competitive one, but I feel Means grittier work with a higher work rate and broader selection of weapons will enable him to gain the upper-hand and claim a win on the scorecards.

Putting this heavyweight fight on the main card is a bit of a headscatcher given that Vanderaa has lost five of his six UFC fights, while Contender Series recruit Cortes-Acosta is making his promotional debut after compiling a 7-0 record.

There’s a strong case to be made that Vanderaa is lucky to still be on the roster, let alone anywhere near the main card. He’s the kind of fighter that doesn’t stand out in any particular regard, and doesn’t help his case by rarely using the wrestling and grappling side of his game that helped him earlier in his career.

Instead, these days Vanderaa prefers to just strike, and he lacks real stopping power by heavyweight standards and so instead relies more on outlanding his opponents with a higher volume of strikes over time. However, he’s no stranger to eating strikes in return, and doesn’t have the best chin, having been TKO’d three times during his five UFC losses.

Meanwhile, like many Contender Series prospects, the 31-year-old Cortes-Acosta is a fairly raw fighter. A former minor-league baseball player who also had a 6-4 stint as a boxer, Cortes-Acosta’s technique isn’t particularly refined, but he has heavy hands and moves well for his size.

If Vanderaa was willing to make use of his wrestling then he could find success here, but given that he’s went this deep into his losing streak without arriving at that answer it’s more likely he’ll just continue with his usual style. And I think that’ll work out better for Cortes-Acosta, who should be considerably quicker than his more plodding opponent, who was TKO’d just a few months ago, and I think is heading towards the same fate on Saturday night.

Neither of these two fighters has managed to emerge victorious in their Octagon outings so far, with Fremd losing his debut against Anthony Hernandez earlier this year via unanimous decision, while Gore joined from TUF but has lost twice since then, including being KO’d in the first round by Cody Brundage in July.

The 28-year-old Fremd is the more experienced campaigner here, having fought for the likes of Bellator and LFA in the past, while Gore is only five fights into his pro-career.

Fremd also has a notable size advantage, being 4″ taller with 3″ in reach over Gore. Fremd is a fighter who focuses on solid fundamentals rather than flashy strikes, and will be fairly aggressive, while also seeking takedown opportunities.

Gore is a clear case of a fighter who hasn’t lived up to his potential yet. He’s got the physical ability and puts his strikes together nicely when he engages, but he can be hesitant to do so at times. That’s a concern as there’s a lot of pressure on his shoulders here to get a win, and while that could push him to be more offensive in this fight, the fact that he was KO’d last time out could make him retreat into his shell even more.

Fremd’s UFC debut loss came against a good opponent, so I don’t think he’ll be too phased by that and he feels like the more steady, reliable fighter here who will stick to the basics and outwork Gore to win by decision.

Jacoby has done well in his second UFC run, going unbeaten in seven Octagon encounters, while Rountree was coming off two losses in a row not so long ago, but has turned things around with back-to-back TKO wins.

Jacoby has done well to turn things around after a brief spell in the UFC back in 2011 that saw him suffer back-to-back losses, followed a few years on by a similar fate in the bellator promotion.In his near decade-long absence from the UFC, Jacoby also had an extended run as a kickboxer, fighting frequently for Glory, where he only went 10-8, but did pick up some notable wins along the way and helped level-up his striking ability.

As such, these days Jacoby is now a more refined and technical kickboxer and he’s gained a lot of confidence as his current winning streak has gone on, meaning that he’s now riding a wave of momentum into Saturday night’s fight.

In Rountree he’s going up against a dangerous mauy thai fighter who has fight-ending power in all eight limbs. However, his cardio isn’t the best and as such his output can suffer as the fight goes on.

With his kickboxing experience and solid durability Jacoby will not be overly-intimidated by Rountree’s power here, and I think with his better cardio and output he’ll gradually take control of the fight to win out on the scorecards.