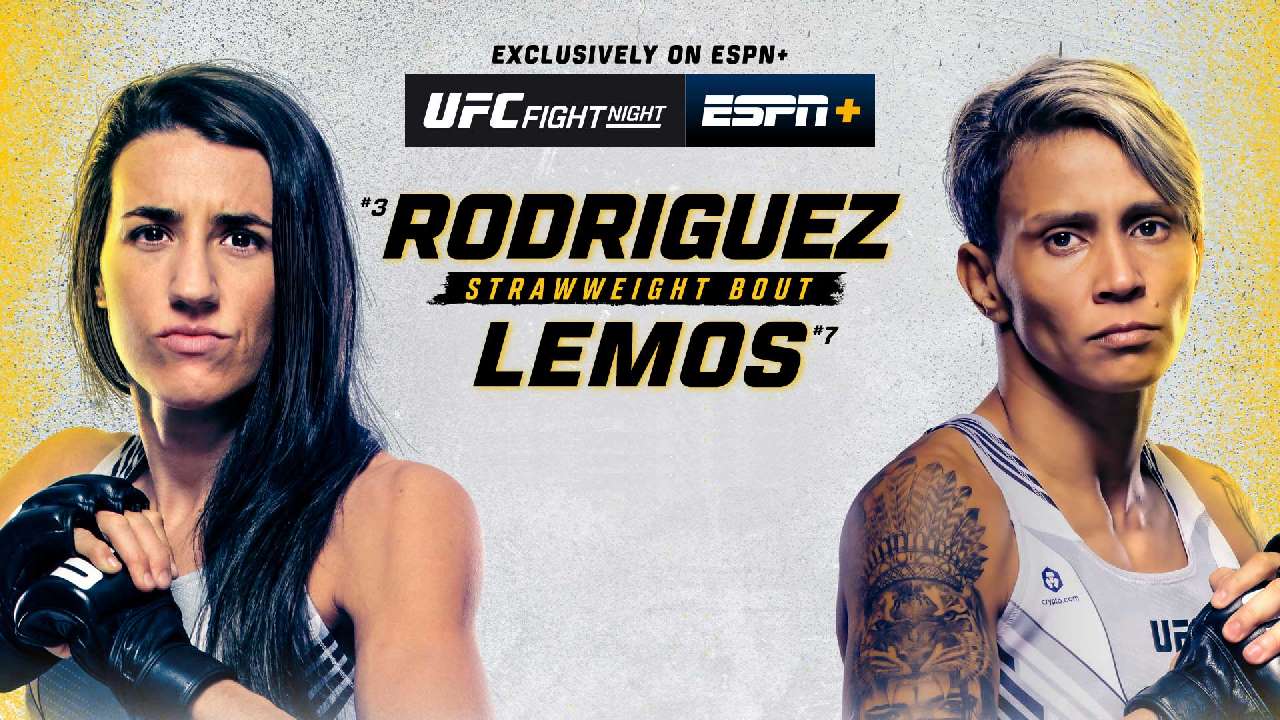 UFC Fight Night 214 takes place tomorrow night in Las Vegas and we’ve got our predictions for all the fights below.

Rodriguez is currently ranked No.3 in the strawweight division after putting together a four-fight winning streak, while Lemos has won six of her last seven bouts, and beat Michelle Waterson by submission last time out.

Rodriguez is volume orientated striker who likes to operate from range with good technique rather than big raw power, and she does a good job defensively too, while also having the cardio to go five rounds. Her ground game isn’t as good though, which is a concern since her takedown defense isn’t impenetrable.

Lemos also likes to operate on the feet and employs a more aggressive style, piecing together strikes with good power that has helped her rack up a number of stoppage victories. She’s more versatile than Rodriguez in that she’s also comfortable going to the mat and will be a threat via submissions.

That being said, Lemos’ offensive style tends to wear on her cardio and that could be a real problem in what’s set to be her five-round fight. And if she can’t find an early finish there’s a good chance this fight could go into the later rounds as 9/10 of Rodriguz’s UFC fights to date have gone the distance and it’s also worth noting she’s never been stopped by either strikes or submission.

Lemos is more dangerous than many of Rodriguez’s past opponents in terms of finishing ability, but I still think her more consistent pace and offense for the full 25 minutes will help her to seal a decision victory.

A submission loss to Shavkat Rakhmonov last time out has left Magny at No.13 in the rankings, while one place below him is Rodriguez, who is currently enjoying a four-fight winning streak.

At 35-years-old, Magny remains a real test for most fighters in the 170lb ranks, as evidenced by the fact he’d won five of his past six fights prior to going up against Rakhmonov. He’s a savvy veteran who has a well-rounded set of skills that enables him to be competitive whether it’s striking at range (he’ll have a 2″ height and 6″ reach advantage here), working effectively from the clinch, or controlling the action on top.

Magny doesn’t have much in the way of stopping power though, which can make it more difficult to fend off an aggressive foe, and while he’s comfortable on the mat he’s not much of a submission specialist and has actually been tapped out more times than he’s produced one himself.

Also 35, Rodriguez’s game is more firmly focused on striking and he has good boxing ability in particular, which provides a solid platform for his steady pressure and high-volume offense, delivered with respectable power, while he also has a dependable chin.

This fight was postponed not all that long ago due to D-Rod dealing with an elbow injury and it remains to be seen if he’s given himself enough time to fully heal from that. He should be the more active and hard-hitting striker here, but I think Magny has the deeper overall skill-set and will use that to mix in clinch work to grind out a decision victory.

Sherman finally got a win under his belt last time out, defeating another struggling heavyweight in Jared Vanderaa to end his four-fight losing slump, and now he’ll fight Parisian, who has gone 2-2 in the promotion to date.

These two are unranked in the heavyweight division and to be honest there’s not a great deal of evidence that they’ll ever reach beyond that. Parisian is a willing striker who will even mix in some spinning attacks, but it’s a style that doesn’t have a great deal of technique backing it up and lacks cohesion, while he’s also there to be hit in return. He’ll also try for takedowns too, but again is not particularly convincing with his execution.

Sherman also has a high-volume striking style, but he’s more technical than Parisian and pieces together his combinations better and has finishing power, with 15 of his 16 career victories coming via strikes. However, Sherman’s offense is much stronger than his defense and his cardio is also an issue if the fight goes long, while he has limited ability on the mat.

It’d be a mistake to confidently pick either of these fighters, but I feel that Sherman is the better striking and his takedown defense should be enough to fend off someone of Parisian’s skill-level, leading him to a first or second round TKO win.

Ulanbekov won his first two fights in the UFC, but lost to Tim Eliott last time out and now fights Maness, who had a trio of victories in the Octagon prior to being beaten by Umar Nurmagomedov in March.

At 31-years-old, Maness is making his first cut down to flyweight, having previously fought everywhere from bantamweight through to lightweight up to this point. He’ll certainly have a size advantage as a result, being 3″ taller with 2″ in reach over Ulanbekov, but it remains to be seen how well he’ll cope with what will surely be a challenging weight cut.

Maness should also have the striking advantage here and will aim to keep Ulanbekov at a safe distance with his solid punches and kicks, while he can go for opportunistic submissions if he is taken down.

Ulanbekov is working to improve his striking, but it’s still on a more basic level than his opponent here and is generally just used as a way to close the distance and go for takedowns. He’s not the most active when he gets the fight to the mat though, opting more for control than damage, though he is a threat via submission.

I do have concerns about the weight cut for Maness here and he’s also coming off a loss to Umar Nurmagomedov where he was controlled on the mat, and while Ulanbekov might not be as good, I think he can follows a similar strategy to win on the scorecards.

Two lightweights with strong winning records clash here, with Dawson already seven fights unbeaten in the UFC so far, taking his overally tally to 18-1-1, while former Olympic wrestling silver medal winner Madsen is a perfect 12-0 in his career so far, including four UFC victories.

There’s a big difference in age here though, with the 38-year-old Madsen having spent many years on the wrestling mat competing at several Olympic Games to win that medal before moving on to MMA, while Dawson is a decade younger and began competing in this sport from an early age, leading to him signing with the UFC when he was just 23.

Given that he’s turned his focus to the sport quite late, Madsen has actually done quite well to attempt to round out his strong wrestling foundation with other skills, and you can certainly see an improvement in his stand-up game from fight-to-fight during his UFC run so far. He has found some comfort with his boxing, but there’s not a great deal of depth to his overall striking ability at this stage.

Dawson’s not a particularly notable striker either and while he doesn’t have Madsen’s Olympic background, he is also a very good wrestler who is much more of a proven finisher when he gets the fight to the mat, solid good ground-and-pound and good submission ability, which has led him to 16 finishes from 18 career wins.

Madsen’s much less of a finisher, so if the fight ends before the final bell it’s likely to be Dawson who has his hand raised. However, I could see this one going the distance, and even bearing that in mind I still feel that while these two match up fairly well skill-wise, it’s Dawson who has the edge, with his own wrestling being more tried-and-tested from an MMA standpoint, which along with his pressure on the feet will see him seal a decision victory.