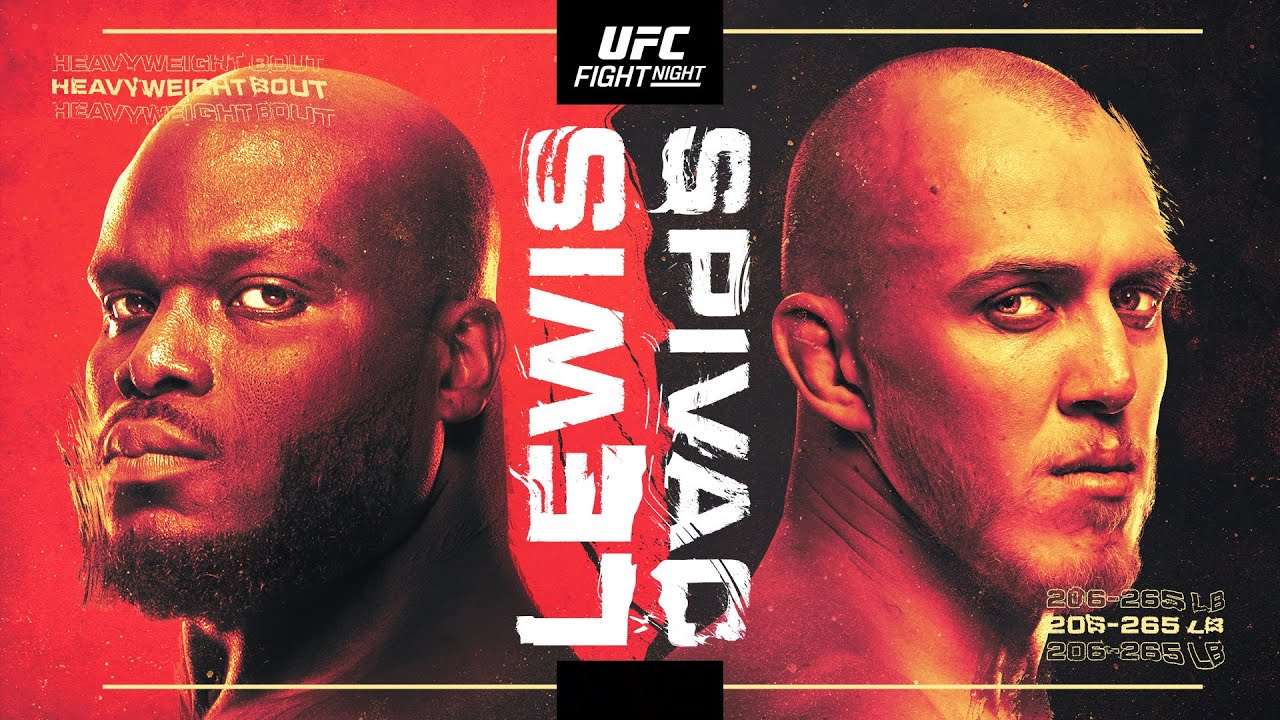 UFC Fight Night 215 takes place on Saturday night and we’ve got our predictions for all the fights below.

With three losses in his last four fights via strikes, Lewis is in the midst of a troubling time in his UFC career, while Spivak has picked up five wins from his last six outings, including two TKO victories in 2022 so far.

Despite his recent disappointments, Lewis remains the UFC’s all-time leader in delivering KO finishes with no less than 13 to his name. And that’s pretty much the sole focus of his striking game, operating at a slow pace on the feet and offering little in the way of volume, but when he does decide to engage he is surprisingly fast for his bulky frame and of course he possesses exceptional power in his hands.

And that’s been his get-out-of-jail-free card for many years in the sport, even when he’s been on the brink of defeat in the dying seconds of a fight. But his flaws have always been evident along the way, including his sub-par cardio, reliance on brute strength to make up for his lack of skill on the mat, and now a weakened chin too.

Now he’s facing an opponent in Spivak who is a full decade younger than him and is more well-rounded too. Admittedly, while he can strike, he’s nowhere near the kind of power puncher that Lewis is and he has been TKO’d a couple of times in the first round during his UFC and as such will have little desire to go toe-to-toe with ‘The Black Beast’. However, with his strong suit being his ground game he’ll no doubt see plenty of opportunities to utilize his good takedowns, assured grappling and proven submission ability, while he can also make an impact via ground-and-pound too.

That’s how Spivak took care of another heavy-handed slugger in Tai Tuivasa early in his UFC run and while with Lewis there’s perhaps even more risk of being greeted by a fight-ending counter-punch as he closes the distance for takedown opportunities, I’ll still take him to use that major grappling advantage to emerge with a second round submission stoppage.

A TKO win last time out took Nzechukwu’s UFC record to 4-3, while Cutelaba has lost six of his last eight UFC fights, including coming off two 1st round submission losses in a row.

Cutelaba is one of the UFC’s quintessential ‘glass cannons’. He can be a destructive force offensively whether he’s throwing bombs on the feet or bringing the fight to the mat to maul his opponents with brutal ground-and-pound, but meanwhile his desire to end fights all too often ends up with he himself being the one that’s finished, either by strikes or submission.

Luckily for him there’s little likelihood of Nzechukwu tapping him out, but the ‘African Savage’s’ big knockout power is certainly something he should be wary off. Nzechukwu, who is a huge light-heavyweight and will have a major 4″ height and 8″ reach advantage here, also carries that finishing ability with him throughout his fights, which is something that ‘The Hulk’ tends not to be able to match, with his pace and power fading if his early exertion doesn’t result in a stoppage.

Nzechukwu has also shown signs that his wrestling is developing and he has respectable takedown defense to help him out if necessary, but I think it’ll be his powerful strikes from range and more measured pace that will help him on his way to a second round TKO finish here.

It was only three weeks ago that Contender Series recruit Cortes-Acosta made his UFC debut with a decision win over Jared Vanderaa. Coincidentally Vanderaa was also Sherman’s last opponent, which gave him the opportunity to end a four-fight losing streak with a TKO finish back in July.

Cortes-Acosta is a good athlete by heavyweight standards, but even though he has a 6-4 record as pro-boxer he’s still pretty raw skill-wise. As such he sticks to boxing fundamentals and moves well for his size while looking to apply plenty of pressure and land his big right hand. Vanderaa was able to punish him with leg kicks repeatedly during their fight, but he did show his mental toughness to continue moving forward regardless and get the win.

Technically Sherman is the better striker here, although he has a tendency to brawl that can get him into trouble due to his defensive lapses. Offensively though he has a high output and is a proven finisher, with 15 stoppages from 16 career victories, and he’s more versatile in his attacks than Cortes-Acosta so he will look to exploit his vulnerability to leg kicks.

This fight really could go either way. I think Cortes-Acosta may be the sturdier of the two which could help him out, but I don’t really like the fact that he fought so recently. He’ll barely have had time to recover from all those leg kicks he took, let alone learn how to protect himself better and I think Sherman will looks to exploit that as part of his frequent combinations, while also going head-hunting to emerge with a second round TKO victory.

After a 2-2 run in the UFC so far Fialho now goes up against Salikhov, who was TKO’d in his last fight after going on a five-fight winning streak prior to that.

Fialho’s entire UFC career to date has taken place this year, including squeezing three fights into a three month period. That’s always a risky endeavour, but it started off well enough for him with a 1st round TKO victory over Miguel Baeza being followed by a 1st round KO win against Cameron Vancamp. However, he then stretched himself too thin by taking another fight a month later, which resulted in him being KO’d by Jake Matthews.

Thankfully the 28-year-old did take a few months off after that, but will now make his 5th appearance in 2022 on Saturday night. It shows he really is a fighter at heart, if that wasn’t already evident from his performances in the Octagon as he’s an aggressive boxer with an effective left hand in particular who will take the fight to his opponent and has delivered 13 stoppages in 16 career wins.

As we’ve often come to expect from those who compete in this fashion, Fialho’s defense leaves something to be desired and so he eats more punches than you’d like to see and isn’t as comfortable when he’s the one being pressured or is forced to grapple.

With a decorated background in Wushu Sanda, Salikhov is known as ‘The King Of Kung Fu’, and is primarily a striker, though he’s comfortable wrestling too. He gives up an inch in height and 4″ in reach to Fialho, but he has a more versatile selections of weapons, throwing more kicks and spinning attacks, which secured him some spectacular finishes in the regional circuit, but haven’t been paying off as much in the Octagon.

At 38-years-old Salikhov’s pace and volume has slowed down, but I think his more measured approach on the outside could pay off against Fialho’s less defensively sound aggression, while Salikhov’s wrestling could also be an important factor along the way to help him edge out a win on the scorecards.

Another Contender Series product, Maddalena has made a perfect start to his UFC run with two first round TKO victories in a row, while Roberts is 7-5 in the promotion and is coming off a decision loss to Francisco Trinaldo.

The 26-year-old Maddalena has good skill in the boxing department with nice shot selection to the head and body and he backs up his bullying style with a solid chin – which is just as well given his willingness to be hit in order to land his own blows. Roberts is a bit of a jack-of-all-trades, but hasn’t stood out enough in any regard to really stand out in the competitive welterweight division. He does have heavy hands though and that’s earned him some big KO wins, though he likes to kick too. He can also threaten with submissions, but I’m not sure his wrestling is effective enough to ensure he can get the fight there in the first place.

Roberts is almost 10 years older than Maddalena at 35 and has been KO’d three times during his UFC career. As such I think Maddalena’s better boxing ability and stronger chin will enable him to get the better of the action and claim a TKO victory in the second round.