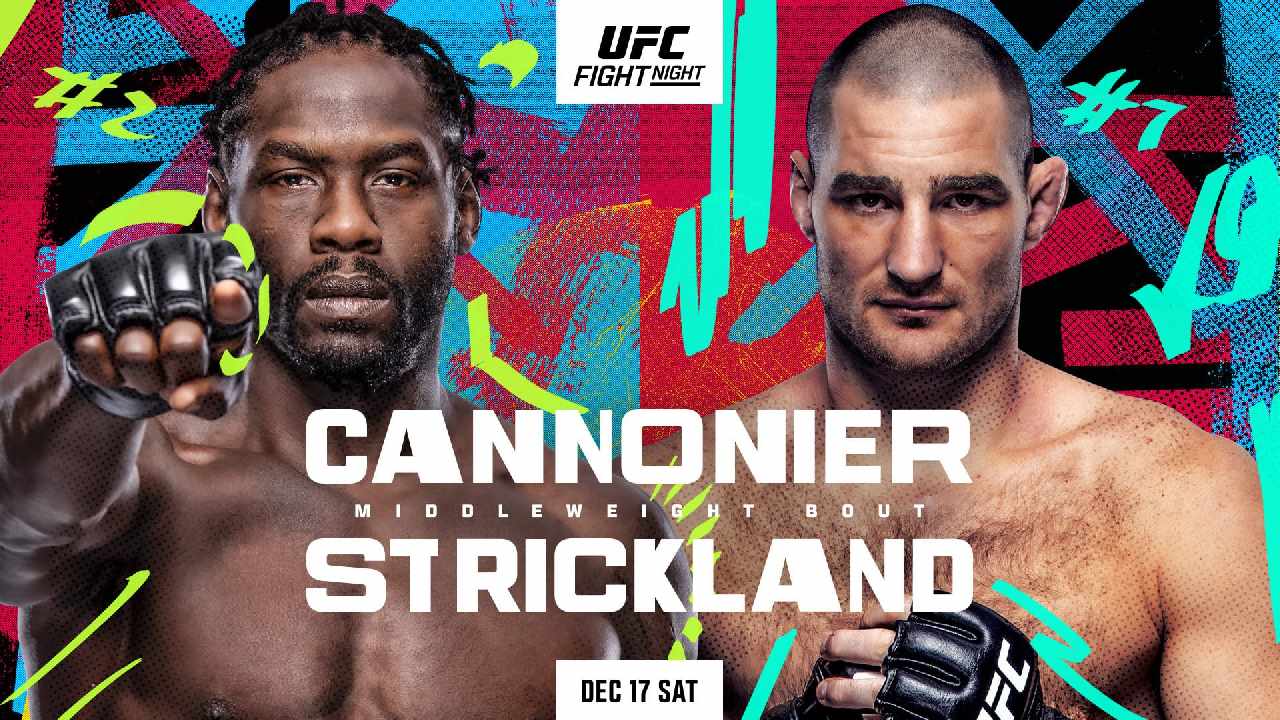 UFC Fight Night 216 takes place on Saturday night and we’ve got our predictions for all the fights below.

Cannonier lost his title challenge against Israel Adesanya last time out, but had won five of his previous six fights.  Strickland saw his own five fight winning streak end in his last outing via KO against Alex Pereira, who of course has since gone on to become the new champion.

Both fighters relish a striking battle, and in terms of sheer power there’s no doubt that Cannonier has the edge here, including four his last five wins coming via either KO or TKO. He has good muay thai ability and while his punches and elbows are a big threat, his leg kicks are also a major weapon.

Cannonier likes to pace himself though and picks and chooses his moments to engage, whereas Strickland is more of a pressure fighter who likes to continually press forward, push the pace and engage in both a striking battle, and a battle of wills. There’s less variety to his offense than Cannonier, but he will offer up a significantly higher offensive output and is a solid technical boxer.

Strickland could also look to use his wrestling here, but I think he’ll prefer to strike and I’m not sure that trying to continually walk down an explosive, heavy-hitter like Cannonier will pay off for him, particularly as his legs will be vulnerable to being chopped down. So I’ll take Cannonier to win by TKO in the third round.

Prediction: Jared Cannonier to win by TKO in Rd3

Tsarukyan’s five-fight winning streak ended last time out with a loss to Mateusz Gamrot, while Ismagulov remains unbeaten in his five Octagon outings so far.

Needless to say with stats like that, these are two very high level lightweights and should be an extremely competitive fight. Even though Tsarukyan lost his last fight he gave a very good account of himself. It’s also worth keeping in mind that he’s still only 26-years-old, yet he’s already a really well-rounded fighter and good athlete. His wrestling and grappling are particularly strong and he thrives in scramble situations, to the extent that he even gave Islam Makhachev a tough fight in his UFC debut back in 2019.

Tsarukyan backs that up by being very capable on the feet too. He keeps a good pace with solid boxing ability that delivers with speed and power, while kicks are nicely mixed in too, and he generally doesn’t take much damage in return.

Ismagulov is a big lightweight and is also skilled in all facets of the game, and it’s impressive to note that the 31-year-old is actually on a 19-fight winning streak when you count his victories on the regional circuit too. He’s not been very active during his time in the UFC though, with only two fights in the last three years, which has held him back.  He also has more of a grinding approach with a mix of clean strikes from range to keep opponents at bay on the feet and solid wrestling, leading to an approach that doesn’t catch the eye as much as some of his counterparts.

Both men’s skill-sets make them very hard to beat, so it’s not easy to say with any great degree of certainty who will emerge victorious, but I do think there’s more pace, activity and aggression from Tsarukyan wherever the fight goes and that will give him the edge when the fight goes to the judges after 15 closely fought minutes.

With a 3-0 record in the UFC so far, Albazi was originally set to fight Alex Perez on this card, then Brandon Royval, before finally landing with short-notice replacement Costa instead – a newcomer with a 12-2 career record.

The 26-year-old Costa actually won by split-decision on the Contender Series earlier this year, so he’s been on the UFC’s radar for a while. He’s got solid boxing and won his last fight by KO in just 12 seconds, but he’s primarily a grappler and is a threat with submissions.

Albazi is less comfortable on the feet, but the 29-year-old is a beast on the mat with his wrestling and grappling ability and has already shown off his finishing prowess via submission a couple of times during his time in the UFC.

Costa is not a bad fighter at all, but this is a tough first test for him, especially on short notice, and I think Albazi will prove to be the better fighter on the mat to claim a decision victory.

Caceres enjoyed his best run of form to date between 2019-2021, racking up five wins in a row, but after a decision loss to Sodiq Yusuff earlier this year he’ll now attempt to get back on track against Erosa, who is on a three-fight winning streak and has won 6 of his last 7 bouts in the promotion.

Caceres has a distinctive karate style, staying active on the outside with rangey kicks and punches, but he’s not particularly potent with his offense and so has to rely more on volume. He’s also crafty on the mat and will create scrambles and hunt for submissions whenever possible, though the downside of that is his defense isn’t as good and so it can end up in a 50/50 situation as to whether he gets the submission or is tapped out himself.

Erosa also likes to work from range with his striking, and he is lanky for the 145lb division, holding a 3″ height and 1″ reach advantage. Throughout his long career Erosa has proven to be a finisher, with no less than 11 wins via strikes and 12 via submission from 28 pro-victories, but he’s not stranger to being hit and doesn’t have the strongest chin.  In fact, between his three runs in the UFC he’s been finished via strikes on four occasions, and that’s not including a TKO loss to Artem Lobov on TUF.

Nevertheless, I don’t see Caceres stopping Erosa on the feet as he just doesn’t have that kind of stopping power, and I think Erosa will use his reach advantage and be the more aggressive and effective striker to claim a decision victory.

Dober’s had a good year so far with two wins in a row via strikes and looks to keep that going against Green, whose own two fight winning run came to an end when he was TKO’d by Islam Makhachev back in February.

Dober is a pressure fighter who relies on his extremely sturdy chin as he wades into battle to slug it out with his opponent. He’s got good boxing though he relies more on output than finesse, and while that on it’s own is challenging to deal with, he’s also done a good job of harnessing his finishing power over time, with his last five wins all coming via strikes.

Green is also a high volume boxer, but he takes a different approach from Dober, being more mindful of his defense with an assured shoulder-roll often coming to his aid, while he’s also crisp on the counter and has good speed in his punches.

Green doesn’t have the biggest power though, so while I certainly foresee him finding a home for his punches quite often, I think there’s a chance that Dober will be able to withstand that and walk through the fire in order to land his heavier blows. It remains to be seen if that’ll be enough to secure a finish, but I suspect that if nothing else it will look better in the eyes of the judges, leading Dober to an entertaining decision victory.

Oleksiejczuk has had some mixed results in the UFC, but overall he’s 5-3 (+1nc) and is coming off a TKO win over Sam Alvey as he prepares to take on a late replacement in Brundage, who has finished his last two UFC fights in the first round.

Oleksiejczuk has good hands and big power, as can be seen from having won four of his five UFC fights in the first round via punches. He’s leaned quite heavily on that side of his game while steadily trying to develop other aspects to become more well-rounded, but his takedown defense is still questionable.

Brundage is a big middleweight, with his strongest suit being his wrestling base, while he has a powerful overhand and some solid kicks too.

Brundage isn’t the most technical with either his wrestling or his striking though and I think Oleksiejczuk will have the advantage on the feet and make the most of that to earn a second round TKO victory.

Prediction: Michal Oleksiejczuk to win by TKO in Rd2