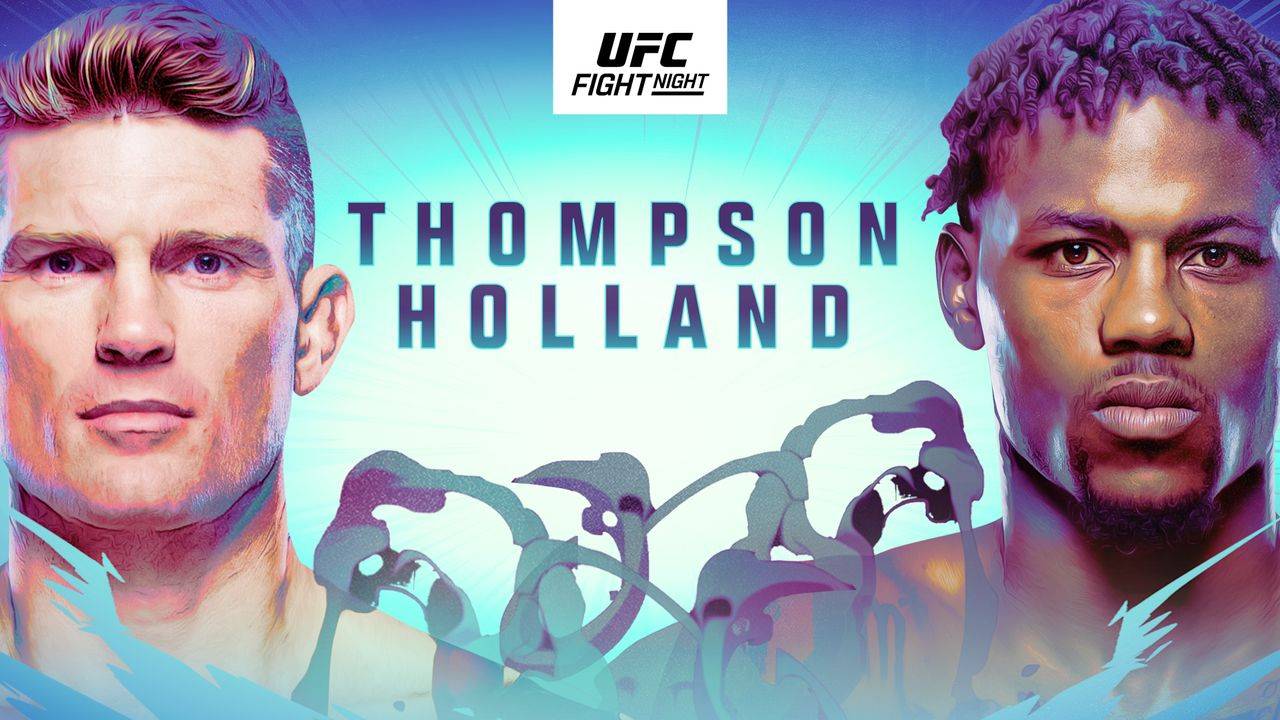 UFC on ESPN 42 takes place on Saturday night and we’ve got our predictions for all the fights below.

Thompson has left it late to make his first appearance of the year after suffering back-to-back decision losses in 2021.  It’s a different story for Holland, who is making his fourth appearance of the year, with two wins after a switch to 170lbs being followed by a last-minute 180lb catchweight match-up against Khamzat Chimaev that he lost by a 1st round submission.

Being outwrestled was a major issue for Holland in the latter stages of his 185lb run and after that same old problem reared it’s ugly head against Chimaev, so he specifically called out Thompson for his next fight due to the fact that he’s a fellow striker who has no interest in going to the mat.

Holland clearly wasn’t just looking for an easy fight though as Thompson has long been considered one of the division’s most elite strikers, and though he’s going to be 40 in just a few months time he’s still in great shape.  He may not be quite a sharp as he was in his prime, but he continues to be relatively fast and agile with his karate-orientated attacks, throwing head kicks with the same apparent ease as most fighters throw a jab.

The 30-year-old Holland has proven to be a dangerous striker in his own right though and is the bigger man, with a 3″ height and 6″ inch reach advantage to work with here. And like Thompson he is comfortable working at range and has the more potent punching power of the two, while also being fast and athletic.  Nevertheless, in terms of pure technique and fight IQ then ‘Wonderboy’ has the edge.

This is a tricky fight to call as Thompson is a challenging opponent to beat in a pure striking battle, but with Holland’s reach, power and more willingness to both apply pressure and throw caution to the wind I can see opportunities for him to land a fight-ending blow on his ageing opponent to win by TKO in the third round.

Prediction: Kevin Holland to win by TKO in Rd3

RDA went 4-4 during his last 170lb run, but the former lightweight champion then dropped back down to 155lbs and picked up two good wins before a 5th round KO loss to Rafael Fiziev. Now he’s back up at welterweight taking on Barberena, who is on a three-fight winning streak and has defeated two other ufc veteran stars in Matt Brown and Robbie Lawler so far this year.

There’s no doubt that RDA is the more technical fighter here wherever the fight goes. At 38 he’s still a well conditioned, intelligent fighter who fights at a high tempo and can smoothly transition between striking, wrestling and grappling as required, with his ability to wear down opponents on the mat being a strong suit. It’s his skill rather than his physical stature that helped him be fairly competitive at 170lbs in the past though as he’s undersized for the division and will give up 4″ in height and 2″ in reach to Barberena here.

Dos Anjos found himself being overpowered on the mat by bigger, more dominant wrestlers during his previous welterweight run, but that won’t be the case against the hard-headed Barberena, who will be eager to turn this fight into a brawl on the feet, relying on his pressure, high volume striking and toughness to get the better of the action.

RDA isn’t the type of opponent that can be easily worn down in a fight like that though, and though his KO loss last time out is a concern, its worth noting that he has never been stopped in eight fights at welterweight. So, while I still feel it’d be much better for him to focus on fighting at lightweight for the remainder of his career, I still think he can outclass Barberena here and make the most of his advantage on the mat to secure a decision victory.

A battle of KO specialists here, with Tuivasa having won five fights in a row via either TKO or KO before being KO’d himself by former title contender Ciryl Gane last time out, while Pavlovich has won four fights in a row inside the first round by T(KO) since a TKO loss to Alistair Overeem back in 2018.

Despite his love of beer and the belly to prove it, the 29-year-old Tuivasa moves well for his size with good hand speed to go along with his thunderous power, and solid kickboxing fundamentals. He’s more patient than he used to be, though at heart he’s still very much a brawler who always fancies his chances of being the first one to land a killer blow when fists start flying.

‘Bam Bam’ doesn’t have a great deal to offer beyond striking though, which does present the 30-year-old Pavlovich with more avenues of attack as he is the more capable wrestler and grappler here.

However, Pavlovich enjoys the striking battle too, and despite only being an inch taller than Tuivasa he’ll have a whopping 9″ in reach over him. Clearly he has a lot of power, but he also has a cleaner boxing-based style than Tuivasa, piecing together his combinations better.  On the downside though he doesn’t offer up much in the way of kicks.

With so much fire power being wheeled onto the battlefield here then either man could easily claim a big finish at any moment, but I favor Pavlovich to be a bit more compact defensively and find the mark more often on his way to a second round TKO victory.

Prediction: Sergei Pavlovich to win by TKO in Rd2

Nicolau has made a good start to his second run in the UFC with three wins in a row at flyweight to reach No.7 in the rankings, having also had a 3-1 stint a few years earlier.  Schnell is one place below him after having experienced a mixed bag of results in the past few years, going 2-2 (+1nc) in his last five outings.

To be fair to Schnell, his standard of opposition during that time has been consistently high, and he is coming off a nice submission win over Su Madaerji last time out. And it’s his BJJ ability that is the 32-year-old’s strongest suit, with many of his career victories having come by submission.

Meanwhile, on the feet his chin has been a concern, having been KO’d in the first round no less than three times during his 11-fight UFC run. However, despite that he’s not hesitant to strike and instead adopts a pressure-heavy, aggressive style with good output, though he does eat a lot of punches in return.

The 29-year-old Nicolau isn’t an especially heavy-handed striker and isn’t quite as active offensively as his opponent either, but he’s more technical and has fast hands to go alongside his good movement and solid defense. He’s also well-rounded, so he’ll be comfortable wherever the fight goes, both offensively and defensively.

I think this will be a close, competitive battle, but I feel Nicolau is the more solid, dependable fighter here and his skills in all areas makes him hard to beat. While he might not finish Schnell I do think he can exploit his tendency to get hurt at some stage in his fights to help swing the fight in his favor and emerge with a decision victory.

This fight was put together on short notice after Hermansson’s original opponent, Derek Brunson, had to withdraw. Now Hermansson, who has gone 3-3 in his last six fights, will go up against Dolidze, whose earned five wins from six fights in the promotion so far.

Hermansson is another one of those fighters whose patchy record of late can at least partially be explained by the standard of opposition he’s been going up against, losing to former title contenders in Jared Cannonier and Marvin Vettori, along with Sean Strickland.

Hermansson’s striking is a bit janky, but he makes it work from him, often operating effectively from range while delivering a nicely varied, high-volume selections of punches and kicks. He’s also a very capable wrestler and assured grappler, and he’s more of a finishing threat on the mat too via either strikes or submission.

Dolidze is a big, powerfully built middleweight who doesn’t have the high tempo and volume of a fighter like Hermansson, but makes up for it by having serious power, as evidenced by his two first-round KO wins over Kyle Daukaus and Phil Hawes earlier this year, while he’s also a strong, well-credentialed grappler too.

This is an intriguingly poised match-up, with Dolidze being particularly dangerous early in the fight, but Hermansson has the cardio to maintain a more consistent tempo over the course of three rounds, and with a more active striking game and good comfort-level on the mat I think he edges out a decision win.

Another middleweight match-up here, with Anders having only a win and a no-contest to show from his last five Octagon encounters, while Daukaus is 2-3 (+1nc) from his time in the UFC so far.

The 35-year-old Anders has always seemed to have a lot of potential with his athleticism and power, but he’s never appeared to take full advantage of it. Instead, he often fights at a fairly slow pace and his striking is one-dimensional rather than being nuanced and technical. He is durable, but at the same time he’s he’s no stranger to being punched often. He can also wrestle reasonably well though and actually tends to lean on that more these days.

Daukaus is primarily a grappler though and he’s dangerous with his scrambling ability and constantly seeking submission attempts when he is on the mat, with a good finishing record to show for it. The 29-year-old is a respectable enough striker who feels a bit more cohesive in that regard compared to his opponent.  That being said, he doesn’t really have much in the way of stopping power and may be wary of trading with Anders after suffering the first loss via strikes in his career last time out when Roman Dolidze KO’d him in 73 seconds.

In the end though I feel Daukaus is the better fighter and whether he’s threatening him with superior grappling or just being a bit sharper and more purposeful on the feet from range I think he gets the win by decision.